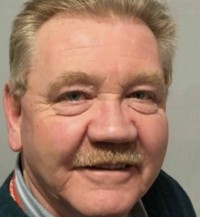 A former newsdesk boss at a daily newspaper has died aged 66 after testing positive for coronavirus.

Tributes have been paid to Derek Masterton, who was assistant news editor at the Daily Record.

Derek, pictured spent 30 years with the Glasgow-based Record before becoming a senior media relations officer for the Red Cross in 2009.

He had retired from the Red Cross just two months ago.

He told the paper: “Derek was a brilliant journalist and a Daily Record legend.

“He was a great reporter and if there was something going on in his beloved Ayrshire he knew about it before anyone else.”

At 16, Derek moved from Irvine to Germany for a factory job to improve his German before going to Glasgow University to study languages.

He became fluent in German but quit university after a year to become a reporter at the Irvine Times, later moving to the Record.

Derek also served as the chairman of the Ayrshire Branch of the National Union of Journalists for many years.

In recent years, he battled lung cancer and sepsis but improved and managed to return to work and go abroad on holiday with wife Nanette.

He died last Friday, around two weeks after being diagnosed with Covid-19.

Derek is survived by Nanette, children Craig, Beth and Heather, and granddaughter Isla.