A weekly newspaper has produced its own social distancing measuring guide for readers to cut out and keep – with a little help from The Police.

The Newbury Weekly News has been inspired by the lyrics of Sting’s former band to print a series of strips which readers can stick to cardboard in order to help them adhere to government guidelines.

The strips, which show the lyrics of The Police’s 1980 number one hit ‘Don’t Stand So Close to Me’, measure at exactly two metres when taped together end to end.

The DIY feature appeared in today’s edition of the Weekly News. 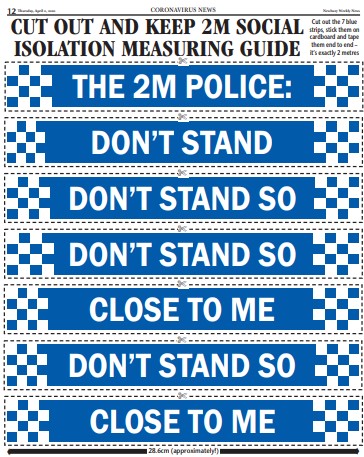 Editor Andy Murrill told HTFP: “It’s so important that people stick to the social distancing guidelines but we could see that quite a few are not keeping two metres apart.

“So we thought we’d use the newspaper to show everyone exactly what two metres looks like.

“And we’ve tried to make it as light-hearted as possible with Sting’s enduring lyrics.”

Former Labour leader Ed Miliband has backed an editor’s plea for government intervention after having to tell his journalists they must all take pay cuts.

Mr Miliband has lent his support to James Mitchinson, after the Yorkshire Post editor wrote an open letter following JPIMedia’s announcement that it would be placing 60 journalists on furlough leave.

The company is also instigating pay cuts for a number of its staff who have been retained in their current roles.

In the letter, James urged the government to commit to investing in a significant local media public information campaign and to extend the 100pc business rates holiday to include news publishers.

The letter was addressed to all Yorkshire MPs, as well as Boris Johnson and Rishi Sunak.

Posting a link to the letter on Twitter, Mr Miliband wrote: “Local papers are a vital resource for our communities.

“I support campaign for government to do all it can to help.”

The family-owned Woking News & Mail has announced it will no longer be available from newsagents for the time being.

Instead, the weekly will be delivered for free to 48,000 homes across its patch.

An editorial reads: “It’s tough times for any business at the moment, but we’re more than a business, we’re the voice of our local community.

“We want to make sure we continue to shine a spotlight on all the positive efforts happening around the area, show how people are making the best of our current situation, and keeping you up to date with all the important local news.”