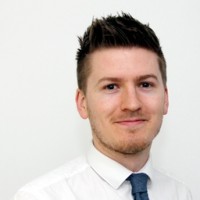 A former regional journalist has been recognised as one of the brightest talents in the video game industry.

Sam Jones previously worked on the Tamworth Herald newsdesk before becoming a content manager with e-commerce entertainment retailer Fanatical in 2017.

Sam, 29, has now been unveiled as one of MCV/Develop’s 30 Under 30 for 2020 – an annual event “showcasing the very best young people in the industry”.

In his role he serves as a scriptwriter and YouTube channel presenter, as well as carrying out marketing, blogging and search engine optimisation duties.

His entry on the list states: “Described as an ‘SEO and content whiz,’ Sam Jones has taken his experience as an award-nominated news journalist into the world of marketing and SEO.

“He has also been a huge presence across Fanatical’s social channels after taking on the role of script writer and presenter.”

Sam, pictured, said: “I’m immensely proud to have been included in the 30 Under 30 list amongst such a great array of talented people from the game industry.

“I’ve made great strides since joining Fanatical and have much more to learn, but this award goes to show that my efforts so far have been noticed, and this is something that I’m very proud to have achieved.”

Sam began his career as a trainee reporter on the Teesside Gazette in 2014, later moving to the Somerset County Gazette and then the Herald.

Katie Thompson, brand marketing and community manager at Fanatical, said: “Sam manages Fanatical’s content and has written over 1,000 blogs in his time here, which has seen a 149.9pc increase in sessions over the last six months.

“After independently putting himself through the SEMrush SEO academy, Sam applied his new skills and understanding of SEO to work on our site which has improved organic traffic by 55.7pc.

“If this wasn’t enough, he is also the main star of our new YouTube videos, writing, recording and performing the scripts, or being on camera reviewing games of interviewing – he is the voice of Fanatical.

“To top it off, Sam also works tirelessly to gain new prizes every month to give away to our customers and has secured many exclusive interviews with gaming celebrities such as Roger Craig Smith (voice actor) and Sasha Zotova (the new face of Jill Valentine in Resident Evil 3).”