A retired journalist has credited self-isolation with his partner’s decision to accept his proposal of marriage – after five years of asking.

Eddie Johnson, a former Teesside Gazette business desk reporter, popped the question to Eileen McLeod after she moved in with him following the coronavirus outbreak.

The couple, who are both widowed, met at a church in Middlesbrough and got together around five years ago.

But until now, Eileen has repeatedly declined Eddie’s proposals of marriage. 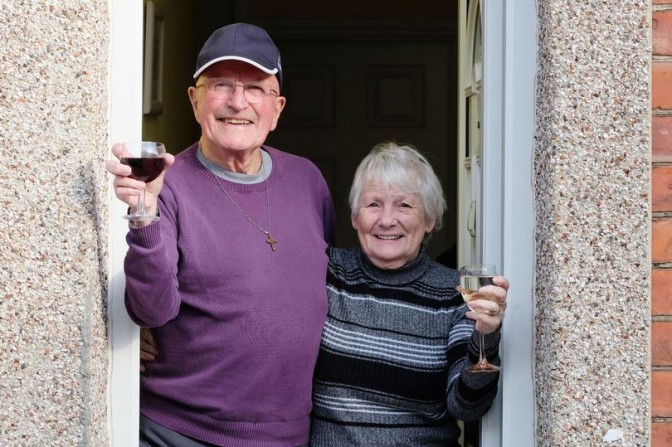 The couple celebrate their engagement while in self-isolation

The couple had flown to California last week to begin a Hawaiian cruise, but had to turn straight back after learning it had been cancelled.

Eddie, 81, told the Gazette: “The virus has actually been good news for me. I have been trying to marry this lady for five years and she has refused up until now.

“We have been told to self-isolate and she has come to live with me temporarily so we can self-isolate together.

“I asked her to marry me again and she said yes. I am absolutely over the moon.”

Retired care home manager Eileen, 75, added: “The decision we both made was for us to both live in the same place, we can share the food and it is good company for us both.

“You never know though, by the time it is up he might want to throw me out.”

The Society of Editors has warned a meeting on how the justice system is functioning during the pandemic must not be held in private.

The meeting of the parliamentary Justice Committee and Secretary of State Robert Buckland is due to take place tomorrow, with only a summary note of the discussion to be provided after the session has taken place.

Writing to committee chair Sir Robert Neill, SoE executive director Ian Murray said: “Given your committee’s important role in scrutinising the Justice Department on behalf of the public, I would welcome your assurances that, if a live-stream of the proceedings is unable to take place, then a full recording or transcript of the session, in its entirety, is provided online afterwards.

“Given the staggeringly high public interest in the actions of government department and public bodies at present, a summary note of the proceedings is not sufficient to ensure that the public has confidence in why decisions are being made in their name.”

In response, Sir Robert said: “We’re aiming for the maximum transparency possible within the constraints we face. Live tweets of new information will be put out as the meeting happens. A press release will be issued asap after it ends about 3.30pm. And the summary note we’re providing will be as full as is possible, with nothing redacted, but in the absence of a normal professional transcript.

“For what it’s worth, it’ll also be provided same afternoon rather than in the 2-4 days for the usual full transcript, and it will be full, reliable and accurate, if not word for word.

“The House does not have available capacity to record and broadcast this meeting, I’m afraid, and we find that as frustrating as anyone.

“The Committee’s fully committed both to scrutinising what’s happening and to getting information to the public. Indeed, it wouldn’t be a scrutiny committee if it wasn’t committed to maximum public provision of information, since that’s one of the reasons it exists.”

The Times has joined national calls for the regional press industry to be given greater support to help it through the outbreak.

In a leader published on Saturday, the newspaper called for the government to direct the “bulk” of its crisis advertising budget to both national and regional papers.

The column added: “Journalists have been rightly identified as ‘key workers’ during the pandemic. It would be perverse if many were instead to spend it idling at home, having been laid off or placed on paid leave.

“One solution may be emergency funds to keep local papers going in the form of grants or interest-free credit. Another may be to extend the 100pc business rates holiday, newly applied to leisure and retail services, to local papers.

“There can be little justification for keeping tanning shops and estate agents afloat while newspapers fold.”

The Scottish government has increased the deadline for public bodies to respond to Freedom of Information requests to 60 days.

The move has been criticised by Catherine Stihler, chief executive of the Open Knowledge Foundation, who told Aberdeen daily the Press & Journal: “Scotland is now in the unenviable position of being the first country in the world to introduce new restrictions on freedom of information as a result of the coronavirus outbreak.

“Openness is key to building public trust during a national emergency.

“Governments across the world must take emergency measures, and the public is ready and willing to accept this, but the best way to ensure continued public support is to be open with people.”

NFRN – the Federation of Independent Retailers has launched a COVID-19 hardship fund for members.

It will offer financial assistance in the form of a grant to newsagents suffering cash flow and other financial challenges through the impact of the coronavirus pandemic.

NFRN national president Stuart Reddish said: “The impact of COVID-19 on the lives and businesses of some independent retailers has been unprecedented. We are acutely aware that some members are facing significant day to day financial challenges and that the help and support that we already provide to them needs to be boosted.

“We have, therefore, created a fund to alleviate the worries that independent retailers are experiencing as footfall in their shops drop and as their bills mount.”