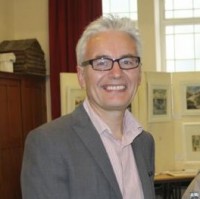 A former editor has returned to his old weekly title as a reporter after his successor left the newspaper.

The Falmouth Packet has announced the return of Paul Armstrong after Steve Smith, who had edited the paper since 2018, left to become a communications officer at Cornwall Council.

It is believed to be the first time in its 165-year history that a woman has been at the helm of the paper.

Paul, pictured, was editor of the Packet from 2008 until 2018, when he left the paper to pursue other challenges, but has now returned as a senior reporter covering Falmouth and Penryn.

He said: “There have been some turbulent times since I left the Packet in 2018, not least of which has been the worldwide pandemic.

“As Cornwall found itself involved in a worldwide story, I found myself wanting to get back into journalism to tell the stories of how local people are coping.

“I have lived in Cornwall for over 20 years now and love the place and its people. I am already loving getting out and about on my old patch and seeing familiar faces and new.

“Things move so fast in this industry and it has changed so much since I left. We are able to tell people’s stories in so many different ways now.

“We can do it instantly on our website, through social media or, for people who like things more traditional, through our series of Packet newspapers.”

Emma first joined the Packet in its Falmouth head office as a trainee reporter, aged 19, back in 2004.

For the last 16 years she has worked her way up through the ranks as chief reporter and then news editor, before stepping back to a part-time reporting role following the birth of her daughter in 2015.

In April this year she returned full time to become audience and content editor, overseeing the Packet’s website, and now adds its print editions to her responsibilities.

She said: “I’m honoured to be taking on this new role at the Packet – a place where I have spent my entire career to date. Many of our readers and contacts in the community feel more like friends, as they are people I have been working with since I began.

“It’s a privilege to take over from Steve, who has spent the last two years growing the newspaper into what it is today and cementing its position in the community, as well as being the driving force behind the transformation of the Packet website.

“I am committed to upholding the Packet’s strong core values of bringing trusted, impartial news coverage to Cornwall, which has always been my home.”