A daily sports journalist has blasted an ex-football club owner’s claims he used to “correct” his paper’s stories before they went to print.

Former Rangers FC owner Craig Whyte claimed in a new autobiography that he had copy approval over stories written by Jim Traynor, former head of sport at the Daily Record who now works as part of the Rangers PR team.

Mr Whyte’s claims were revealed in an exclusive by the Glasgow Times, a rival of the Record, on its front page on Saturday, pictured below.

He bought Rangers from Sir David Murray for just £1 in 2011, but sold his interest less than a year later for £2 before the club went into administration, and then liquidation. 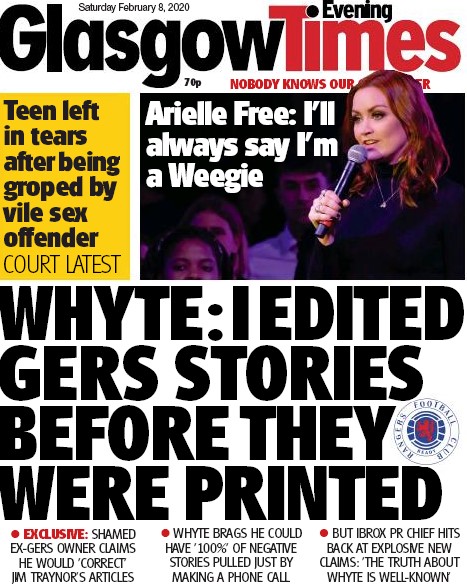 In his book, Mr Whyte wrote: “Jim Traynor used to send me his articles through before he’d print them, and I’d correct them for him. In the pre-internet days, [Sir David] Murray must have had complete control.

“Some journalists were happy to have a good relationship with Rangers if that meant getting stories, even if as a result it became difficult to criticise the club.”

But Mr Whyte’s claims have been rubbished by Record journalist Keith Jackson in a column for the paper.

He wrote: “Whyte will claim that he had the power to control the editorial output of the Daily Record. He will make reference to one specific exclusive in which I revealed his ruinous plan to mortgage off future season ticket sales in the kind of spectacularly high-risk financial model which led to the demise of Leeds United.

“Whyte will claim he successfully ordered Traynor to stop this story from being printed. And these claims are untrue. In fact, my story was splashed across the back page of the Daily Record on June 14, 2011. Only one month after his takeover had gone through.

“What Whyte did do was issue a furious denial which, of course, was completely false but perfectly true to form. He also contacted Traynor to threaten our paper with an Ibrox ban unless he received a personal apology from myself.

“It was given through gritted teeth along with the warning that I still believed my information was correct and would do everything in my power to provide the irrefutable proof. It took another six months of investigating – along with [Rangers board member] Paul Murray’s relentless pursuit of the truth – before we had uncovered that evidence.

“What we found out was far more serious than even we had first imagined. It was now clear that Whyte had effectively crippled Rangers before he had even bought them, by funding his takeover in a mortgaging deal with Ticketus.

“Within a fortnight of that story being published, Whyte had called in the administrators. That’s the truth of the matter. But Craig Whyte always had a problem with handling the truth.”

Jim told the Times: “The truth about [Whyte] is well-known. He was merely a pawn in a strategy – played out perfectly by the Record team at the time.

“So I can understand that he was ultimately and rightly exposed. You’d have thought the pound would have dropped by now.”