Regional newspapers were among those affected by the Extinction Rebellion blockade in Hertfordshire, editors have confirmed.

But titles including the Eastern Daily Press, Norwich Evening News and East Anglian Daily Times were also affected by the demonstration at the Newsprinters printing works at Broxbourne, Hertfordshire.

The EDP and Evening News were later printed at a different site, with deliveries being delayed, while a complimentary e-edition was made available on the EDP’s website. 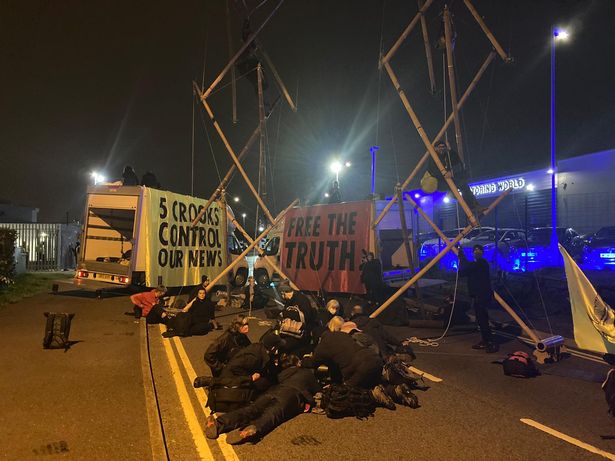 Due to the forced relocation, the EDP’s regular Heaven magazine appeared inside today’s edition instead of Saturday.

Posting on Twitter on Saturday, editor David Powles wrote: “Whatever people think about journalists and the media, our team worked tirelessly over long days during the last six months to try and keep people informed during the height of then Covid crisis.

“Many shops kept open when others closed. This feels like a real kick in the teeth.”

This morning, he added: “While I understand motives for Extinction Rebellion’s actions, when you search ‘EDP24 and climate change’ and find a whole host of features, columns and news stories on the subject, the level of disruption caused to lots of Norfolk people, many of hard-working independents, does rankle.”

XR said the protest, which also affected a printworks at Knowsley, near Liverpool, was held because of the national titles‘ “failure to report on the climate and ecological emergency”.

Posting his thoughts on Twitter on Saturday, he wrote: “We are not a massive publisher. We don’t earn huge salaries.

“Our newsagents are humble hardworking people, as are our printers, van drivers and delivery boys and girls. We rely on newspaper sales to pay the wages that families rely on.”

He added: “Me, and all of those people who rely on the YP – for its content as well as those whose livelihoods depend on it – would love it if you could seek one out.

“This country is what it is because it protects free speech, free thought & a free press. A press that without fear or favour holds the powerful to account.

“But our role is as much about keeping elderly and vulnerable folk company as it is grandiose callings and we’re absent today.

“Make no mistake, I will defend the right of protest groups to protest ’til my last gasp and I see the concerns of Extinction Rebellion but I’ll sleep less easy tonight as a result of letting so many people down who don’t have the internet and don’t care for the TV.”