An editor has publicly congratulated a rival newspaper after it was saved from closure by a new owner.

The Cumberland & Westmorland Herald has published a letter from Keswick Reminder editor Jane Grave expressing her support for the recent takeover of the Penrith-based paper.

The Herald had been threatened with closure after it entered a period of voluntary administration, which saw six members of staff made redundant.

But 22 jobs were saved after Andy Barr, a Cumbria businessman, bought the title last month. 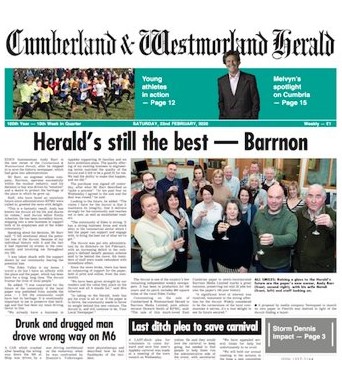 How the Herald covered the deal

The deal’s announcement came 24 hours after Newsquest pulled the planned launch of a title which was set to rival the Herald, to be called the Cumberland & Westmorland Gazette.

In her letter, Jane wrote: “On behalf of all at the Keswick Reminder, I wanted to write to you following the excellent news that the Cumberland & Westmorland Herald will continue to publish weekly papers, after Andy Barr stepped in to save the historic title.

“Although we are technically rival newspapers, we were all shocked after the news broke that the paper had gone into administration — we were standing beside you all, and still do.

“The thought that yet another local newspaper — an historic publication that is even older than our family paper — was under threat, was very upsetting and worrying.

“However, are all pleased that the Herald is still here and doing its excellent job, thanks to Andy Barr. We wish you and everyone involved with the paper the very best for the future.”

Herald editor Emily Atherton told HTFP: “We were delighted to receive a letter of support from Jane Grave, editor of the Keswick Reminder.

“The Reminder, like the Herald, is a truly local independent newspaper which has stood the test of time.

“We are Cumbrian neighbours, engaged in the same enterprise, and the county’s only remaining independent titles.

“The support of Jane and her colleagues means a great deal to all of us here at the Herald.”