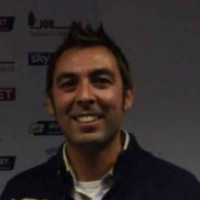 The editor of a regional daily’s district edition has left the newspaper after his role was made redundant.

Nick Loughlin, pictured, has said farewell to the Northern Echo after 27 years of service – 23 of them as sports editor.

More recently, Nick was appointed editor of the Darlington-based Echo’s new Teesside edition when it was launched at the start of 2020.

His sportsdesk colleagues Paul Fraser and Craig Stoddart have also left the newspaper after owner Newsquest confirmed earlier this year it was making cuts to its operations across the country as a result of the coronavirus crisis.

Speaking to HTFP, Nick said: “It’s fair to say I’m quite sad that I’ve left the paper after so long.”

He added: “I’ve thoroughly enjoyed every day and I’ve been proud to be part of every newspaper I’ve helped to produce. I’ve worked with some superb journalists over the years.”

Nick covered more than 2,000 Hartlepool United for Football Club games for the Echo, and has now landed a new role with the Paul Gough Group at an office overlooking the team’s Victoria Park ground.

Nick added: “I’m really enthused and excited for the opportunity to work for the Paul Gough Group of companies.

“There aren’t many businesses that have offices in Hartlepool and Florida, and I’m looking forward to the chance to be able to visit the other office when Covid permits.

“It’s a really ambitious company with plans to grow and expand, and I’m really excited about it.”