An editor has baked a Boris Johnson cake in a bid to recreate The Great British Bake Off from her own kitchen.

Lennox Herald editor Linzi Watson baked the Prime Ministerial snack after using baking as an “outlet” during the coronavirus pandemic.

She has been inspired to undertake the same challenges as the bakers on the TV programme each week, with her first attempt coming after Mr Johnson’s address to the nation on 22 September.

Linzi, pictured below with the PM, explained why she had set herself the challenge in a piece for the Herald. 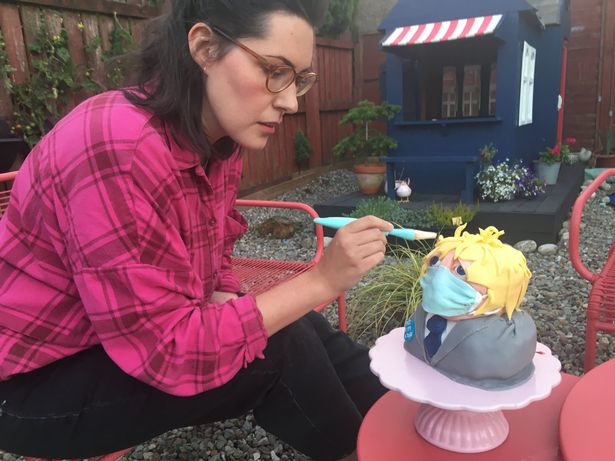 She wrote: “As much as it was a release from the sobering news of the day, baking has become an outlet for so many over the past six months.

“Were you even in lockdown if you didn’t make banana bread after touring local supermarkets for a bag of self-raising flour?

“I include myself in this. And having attempted a number of multiple-tiered children’s birthday cakes with complicated briefs that could only be dreamt up by a bored child — I decided to tackle my first bust.

“Bake Off contests chose their heroes. I chose Boris Johnson, not because I idolise the PM, nor do I envy the job he has faced in the pandemic, but because his face is certainly one of the most topical.

“The task wasn’t without it’s challenges, his hair took the longest, not surprisingly. And, before his face was modelled, there was a horrific chain of events which caused his eyes to leak jam.

“As far as light relief goes, it was a good shout — so I’m planning to attempt to replicate the hilarity of the Bake Off showstopper every week.”