The editor behind a pro-union front page published two days before the Scottish independence referendum is to become the SNP’s top spin doctor.

The Scottish National Party has appointed former Daily Record editor Murray Foote as its head of communications and research in the Scottish Parliament.

Two days before the vote in September 2014, Murray’s award-winning ‘The Vow’ splash appeared on the front of the Record – featuring a pledge signed by the then three main party leaders David Cameron, Ed Miliband and Nick Clegg.

They promised that the Conservatives, Labour and the Liberal Democrats would “guarantee” more devolved powers to Edinburgh in the wake of a ‘No’ vote. 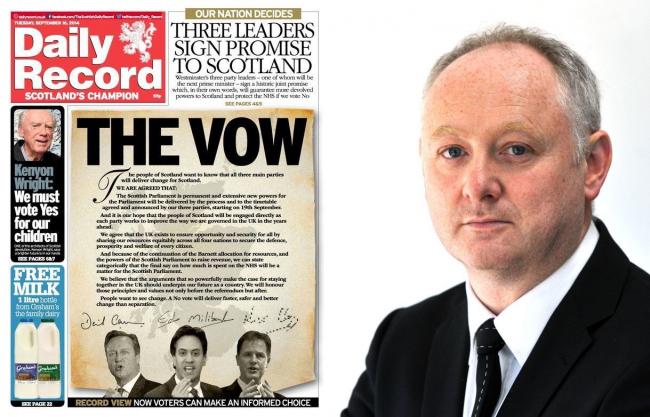 Murray left the Glasgow-based Record in 2018 after four years in charge, and later the same year told pro-independence daily The National he had always privately backed the SNP’s cause.

The 53-year-old, pictured above with the famous splash, told The National’s Newsquest sister daily The Herald today: “I have always been sympathetic to the cause. Anybody who knows me knows – this does not come as a surprise to them.”

Asked about the Vow, he said: “I had a job to do. My job was to represent the views of the readership of the Daily Record.

“That was what I did to the best of my ability, regardless of my political persuasion.”