A regional daily gave dominoes the same coverage it would usually devote to professional football in a bid to fill the sporting void caused by coronavirus.

The Dundee Evening Telegraph ran a double-page spread on “the only sport in town”, due to the postponement of other fixtures, after learning of a match between two local bars at which the Hilltown Central League title would be at stake.

Reporter Kenny MacDonald attended the game between Harlequins and GJ’s and wrote a full match report.

A panel in the style of the Telegraph’s football match-file was also included – rating the tactics, outcome, atmosphere, fans and pies, as well as noting the spectator attendance of 65. 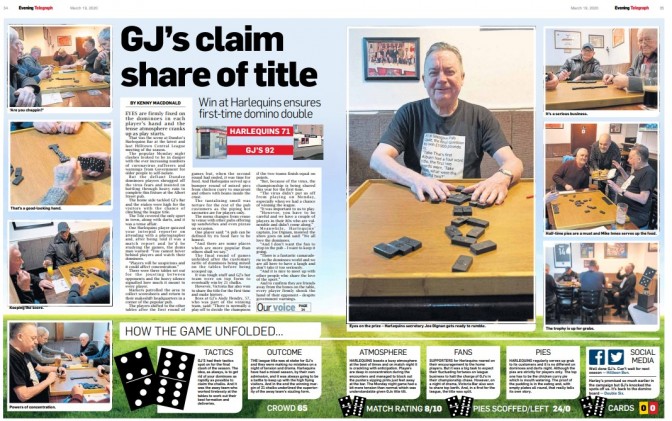 How the Telegraph covered the fixture

Editor Dave Lord told HTFP: “Sadly there is not too much top class sport to report on for our loyal readers at the moment.

“But, far away (both literally and metaphorically) from the pampered footballers and their millionaire lifestyles, a league title was decided this week. And it was only right and proper that the Evening Telegraph was there to witness it.

“Footballers may be sitting with their feet up as coronavirus put paid to the beautiful game, but dominoes players are made of sterner stuff.

“Nothing could stand in the way of a climatic end to the season, played out amid tense scenes at a local boozer.

““Our man was there to capture every breathless moment (not to mention sample a pie or two) so we could bring our readers all the action in our special match-file.”