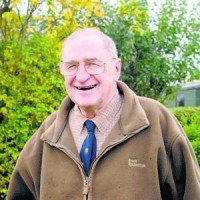 A weekly newspaper’s deputy editor who spent half a century in journalism has died aged 76.

Tributes have been paid to Ian Metcalfe, who enjoyed three periods at the East Lothian Courier and was second in command at the paper until he retired more than a decade ago.

Ian, pictured, also wrote the leader column at the Courier, which he first joined in 1958 after leaving school at 15.

Ian, who was nicknamed ‘Scoop’, also worked on titles including the Daily Record, for which he covered the Lockerbie air disaster.

Courier editor Robbie Scott, who worked with Ian until he retired, said: “Ian was a larger-than-life friendly character who devoted his life to journalism and deeply cared for Haddington, East Lothian and the Courier.

“Many years in the national press taught him all he needed to know about the profession, and it showed the measure of the man that, at the end of his career, he chose to return to the Courier to gently pass on his wisdom to new generations of reporters while still holding those in power to account

” There is unlikely to be a journalist quite like Ian in Haddington ever again.”

His funeral service takes place at 2pm on 4 March at the main chapel of Mortonhall Crematorium, Edinburgh.