A deputy editor has launched his own podcast – with the interviews resulting from it also being published as a double-page spread.

Both episodes have so far attracted national media attention and provided a Q&A style feature across two pages in the Enniskillen-based Reporter.

Rodney told HTFP: “I first came up with the idea last year and went out and bought the equipment. With lockdown and working from home I decided to give it a go and have been doing interviews via Zoom. 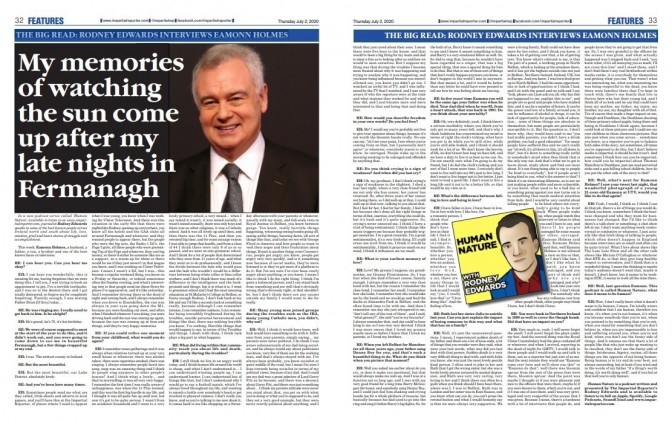 How the Eamonn Holmes interview appeared in the Report

“It’s not how I planned on doing things but the wonders of technology has made it possible. Instead of going off to Dublin, an hour and a half away, or flying to London I’ve been able to do these interviews from my spare bedroom.”

He added: “Each episode features a notable across Ireland north and south reflecting on their journey through life; how they navigate through the daily pressures; deal with emotion; balance mindfulness, make decisions and make sense of the chaos. They explain the lessons they have learned along the way and share stories of struggle and accomplishment.

“It is, I hope, a thought-provoking and engaging conversation on beliefs, memories, ideas and principles as well as exploring topics from different angles and with fresh perspectives.”