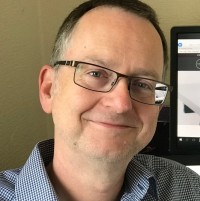 Martin, pictured, spent 34 years in journalism, the last eight of which were with the Examiner.

Prior to that he ran his own newspaper, The Press, in Dewsbury, and Huddersfield-based press agency West Riding News Service.

Martin, who was previously news editor at the Examiner before taking on his most recent role, will join Leuly founder Gemma Birbeck, with whom he has worked professionally in recent years.

He said: “I’m a passionate and committed journalist and I love telling people’s stories and hopefully, in some small way, making a difference.

“I’ve had an unusual career in many ways and know all about the highs and lows of running your own business – and I wouldn’t swap it for the world.

“I’ve built up a huge amount of experience in the media and seen massive changes since I started work on a typewriter as a trainee reporter.

“Now I want to put what I’ve learned into helping clients tell their stories and grow their businesses.”

Martin added: “Gemma is a fabulous person to work with and has offered to help me develop and grow into my new role.

“She has an honesty, a passion and a genuine desire to help others. Leuly PPR has strong brand values which match mine and I’m looking forward to getting started and meeting clients, old and new.”

Leuly was launched last year and has clients both in Yorkshire and further afield.

Gemma said: “I first met Martin during the early stages of my career when I naively asked him whether he wanted to keep a story exclusive – silly, I know, but he was so understanding and supportive.

“When I learnt of his redundancy, I jumped at the chance to show that same level of support as I knew he would be a valuable addition to the team.

“Martin’s not from a traditional PR background, but creativity and individuality are characteristics we desire, and I’m confident the different perspective which he can offer will support us with our continued growth.”

Examiner owner Reach is currently in the process of cutting around 300 editorial and circulation roles as part of a nationwide restructure, although some new positions are also being created.