A regional daily is running a series of weekly specials celebrating its 150th anniversary.

The Birmingham Mail is producing the supplements as it marks a century-and-a-half in business.

The pullouts will appear in the newspaper each Saturday until Christmas and will highlight its campaigning work since 1870.

The Mail says the supplements will also “dig up special memories, recall some wonderful characters and evaluate the role the Mail has to play in the future development of the city”. 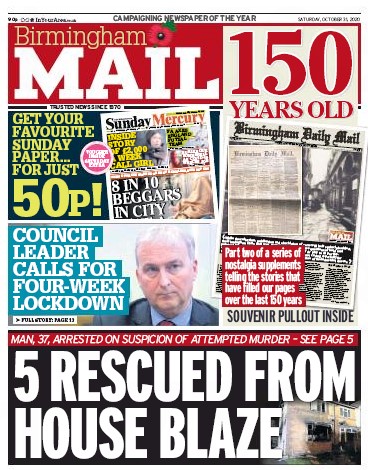 Mail assistant head of print Andy Richards said: “The Birmingham Mail is an institution – it’s at the centre of all that is good about this city.

“No organisation works harder to promote the very best of Birmingham and accurately reflect life in the region.

“To reach 150 is a magnificent achievement and I’m proud to work for a publication which, for many, is a legend. It has such a fine tradition and reputation and is always striving for the best for the people of Birmingham.

“We will be sharing some fascinating stories and nostalgia and the supplements will be a must-have for Brummies of all ages.”

Andy added the supplements, which began on 24 October, would offer schoolchildren the change to “learn something of the history of our city told in a unique format”.

He said: “The history of the Mail is interwoven in the fabric of the city.