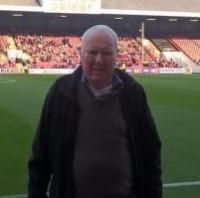 Tributes have been paid to Howard Walker, pictured, who worked for the Colchester Daily Gazette and the Essex County Standard for nearly 40 years.

During his time there, he reported on Colchester United Football Club, as well as golf, cricket, cycling and darts.

He told the Gazette: “Five years later we planned, and brought to fruition the sports section of the new Evening Gazette. A few months later he took over when I moved to the group news desk.

“In later years we joined up together again when I was editing the County Standard and Howard contributed features. Throughout our time working together he was a perfect partner.

“He was utterly reliable, hard-working and a true professional with a wickedly dry sense of humour. This mostly stemmed from personal experiences added to his amazing knowledge of all things sporting.

“It was a rare privilege to have known him, worked alongside him and been able to call him a friend.”

Howard moved to Colchester in the late 1950s after serving as an apprentice at the Harrogate Advertiser and Yorkshire Post.

His funeral was held at Colchester Crematorium on Wednesday.  He is survived by four sons and three grandchildren.