A regional daily has revived its sports newspaper after 18 years as a “rebooted” weekly nostalgia supplement.

The Edinburgh Evening News has launched ‘The Pink – Rebooted’ in order to offer football fans a reminder of their favourite past matches involving the city’s two main clubs, Hibernian and Heart of Midlothian.

The Pink was last published in July 2002 but the revived title will remain true to its roots by being printed in pink again.

Editor Euan McGrory told HTFP that “when are you going to bring back the Pink?” had been one of the questions most frequently posed to him since he took on his current role. 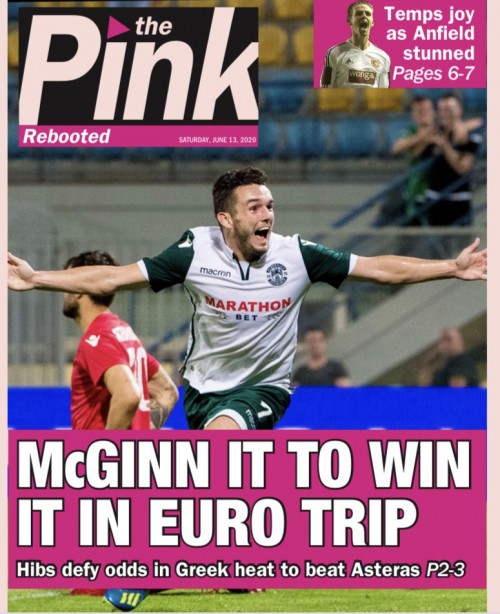 He said: “People remember it incredibly fondly and I recall as a boy nagging my Dad to get a copy and the excitement of poring over all the match reports and league tables.

“Of course these days we provide Hearts and Hibs fans with all that and much more, with almost instant analysis and opinion, straight to their mobile phones.

“We wondered whether there was still an opportunity to bring back the Pink though and offer football fans something different to enjoy on a Saturday.

“Our sports editor Mark Atkinson and his team have been working on a weekly pull-out that will focus on memories of many of the fans favourite games of recent years.

“I have to say what they have come up with is looking fantastic. The icing on the cake for me is that we have been able to print it on pink paper again, just like we used to do.”

Several of the sports desk staff on the Evening News and sister title The Scotsman are veterans of The Pink, including former Pink editors Paul Greaves and Martin Dempster and sports writer and production editor Nigel Southworth.

The first revived edition was published on Saturday.

Euan added: “Working on this has been a lot of fun for our staff because it has brought back a lot of memories. Some of them having amazing tales to tell about results being sent by carrier pigeon and dramatic late winners being missed.

“We’ve included a few of their best tales in Saturday’s first The Pink – Rebooted.”