A regional daily has unveiled “sinister findings” after running a special investigation into the “darker side” of social media.

The Dundee Evening Telegraph has highlighted problems caused by social media after covering the “harrowing” case of a girl who took her own life after viewing disturbing content on social media.

The Evening Telegraph has also told reported how two girls aged under 12 had been targeted by a paedophile on an app their parents later described as being “like Tinder for kids”.

The Evening Telegraph dedicated its first five pages to the investigation in Tuesday’s edition, pictured below. 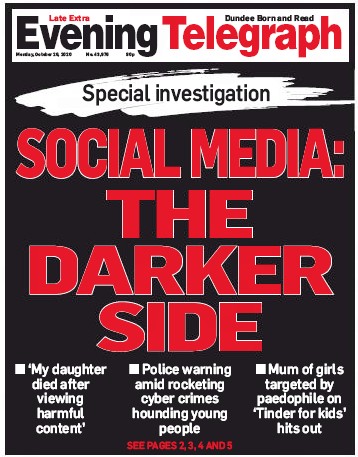 Editor Dave Lord told HTFP: “It was noticeable during lockdown that social media was playing a really important role, helping to keep people in touch.

“From pensioners in care homes being able to interact with grandchildren they hadn’t seen for months to pupils keeping up-to-date with friends while the schools were off, the advantages of increased global connectivity were clear to see.

“But there is also a darker side – and it also came to the fore during lockdown. Police recently reported a rise in sexual cyber crimes targeting children during the pandemic.”

He added: “We wanted to shine a light on these issues, so our dedicated team of specialist schools reporters spoke to parents, kids, police, social media platforms and other interested observers to examine some of the problems associated with the rise and rise of social media.

“There were some sinister findings, but we believe it is important to highlight these.

“Younger people take social media for granted, but for older generations – including many parents – there is still much to learn. Hopefully, by looking at some of the pitfalls, we have helped to encourage learning in this area.”