A sports reporter has raised more than £1,000 in a matter of hours to ensure patients will get hospital radio coverage of a Wembley final featuring the football club he covers.

Within two hours of launching the campaign, Leigh had raised more than double the £600 fundraising target with County donating £250, while past and present players also chipped in.

County, nicknamed The Magpies, secured their place in the final on Sunday after beating Barnet 2-0, with the result providing a splash for the Post on Monday. 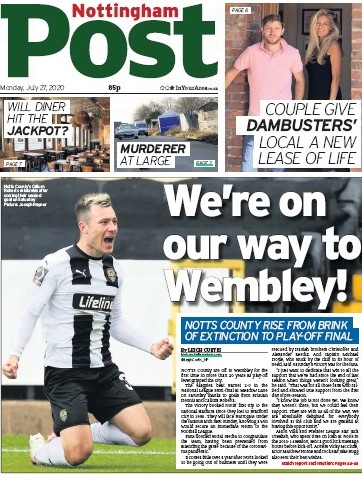 They now face Harrogate Town in the final, with the winner being promoted to the Football League, and Nottingham Hospitals Radio commentator Richard Smith’s coverage of the game will also be broadcast to patients in Harrogate.

Leigh told HTFP: “Richard covers Notts County games on a weekly basis providing commentary for patients at his own expense.

“It’s a volunteer service and when he told me that he would not be able to provide kick by kick coverage because of the broadcast fee, it just felt like the right thing to do.

“Having spoken to Richard he has been absolutely blown away by everybody’s generosity as have I. Notts County made a huge donation as did players past and present, Magpies fans, football supporters and journalists

“Nottingham Hospitals Radio has produced some excellent journalists who have gone on to have a fine career.

“I cannot thank everybody enough for the generosity and goodwill and it will mean that patients at both Nottingham and Harrogate hospitals will be able to listen to full commentary of what is a huge game for both clubs. Those who donated are truly amazing.”