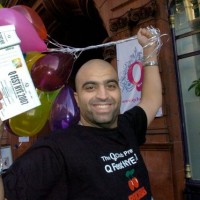 A regional daily has been rapped by the press watchdog after wrongly reporting a restaurant owner had called a customer a “dickhead”.

The Independent Press Standards Organisation has upheld a complaint against the Birmingham Mail over a story which reported George Kafetzis had used the insult in a response to a poor online review by the customer.

However, the offending comment had actually been published by another member of staff at Tamworth’s Funky Bear restaurant.

The Mail apologised for the error, but said there had been confusion because Mr Kafetzis, pictured, had been involved in two similar incidents previously.

Its story had included a screenshot of the review and offending response, as well as a picture of Mr Kafetzis.

The screenshot of the response showed it had in fact been posted by the general manager of the restaurant, not the owner.

Complaining under Clause 1 (Accuracy) of the Editors’ Code of Practice, Mr Kafetzis said the response had been written by another staff member and noted that the screenshots made this clear.

The Mail accepted that it was inaccurate to report that Mr Kafetzis had insulted the customer on the review website, but noted the confusion due to the previous incidents and said it had attempted to contact him prior to publication.

The story had been deleted online once it had been contacted directly about the error by Mr Kafetzis, and the Mail also offered to publish a correction.

IPSO found the error had represented a failure to take care not to publish inaccurate information, and said the offered correction should be published.