A regional daily has celebrated 135 years in business with a look back at its most notable splashes.

Newcastle daily The Chronicle has marked the milestone by picking 10 of its most famous front pages.

The title was first published as the Evening Chronicle on 2 November 1885, and the first edition made the top 10 list.

The list features splashes on international events including VE Day in 1945 the assassination of John F. Kennedy in 1963, man landing on the moon in 1969 and the 11 September 2001 terror attacks.

A front page covering US President Jimmy Carter’s visit to Newcastle in 1977 also appears, as does one marking the end of the national miners’ strike from 1985. 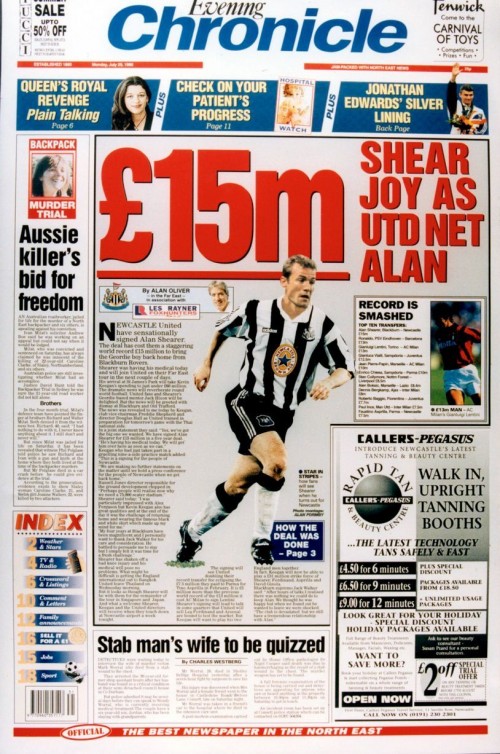 Football also featured heavily on the list, with splashes about Newcastle United’s 1927 title win, the club’s signing of hometown hero Alan Shearer in 1996, pictured above, and the death of former player Gary Speed in 2011 also appearing.

In a piece accompanying the list, Chronicle nostalgia editor David Morton wrote: “Times have changed but, reassuringly, here in 2020, the brand remains strong and respected.

“Today, Chronicle Live is at the forefront of the digital news revolution and our online stories are read by millions every day.

“Meanwhile, the Chronicle newspaper – as well as our sister titles The Journal and Sunday Sun – are still going strong and remain much-loved by a loyal army of readers.

“Since we first launched in the distant sepia-tinted days of the Victorian era, we have provided a window on the world for the people of the region, and we proudly champion the North East.”