A regional daily has penned an open letter to football bosses after a Saudi-led takeover bid for its patch’s top club fell through.

Newcastle daily The Chronicle has written to the Premier League after a consortium led by Saudi Arabia’s Public Investment Fund pulled out of a deal to buy Newcastle United.

The Chronicle has previously spoken out on numerous occasions about current United owner Mike Ashley’s running of the club.

The newspaper splashed on the doomed deal on Friday, pictured below. 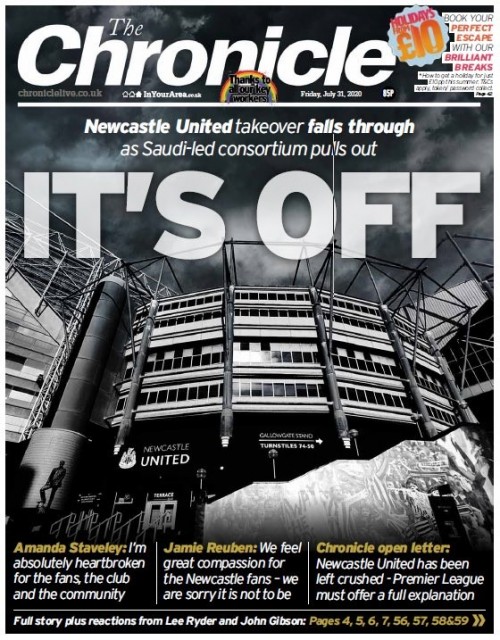 In the letter, Chronicle Newcastle United editor Mark Douglas wrote: “Newcastle United is a crushed football club tonight. A transformative but deeply controversial takeover is off.

“Having dreamed of something different, the city now confronts the reality of what Newcastle are: unloved, divorced from its people, deeply divided and facing the most uncertain of futures.

“We now know the would-be owners’ version of events. They sent a business plan that included a guarantee of £250m to be spent on team building over the next five years and pledged – having been in talks with high level officials in the council – to spend “many millions” on the community and civic institutions.

“They planned to open lines of communication, to talk to The Chronicle and the city.”

Mark added the Premier League stood “accused of blocking a once-in-a-lifetime investment in the city and football club”.

He wrote: “Of course, we have only one side of the story at the moment. The Premier League have, throughout, pointed out that they are duty bound by confidentiality. [Premier League chief executive Richard Masters], you have repeatedly dodged questions on specifics.

“Instead your replies to key stakeholders have reflected a desire to keep as much out of the public domain as possible.

“But with Newcastle facing a bleak future, that cannot continue.It demands a fuls ome explanation of why this deal could not be passed.”