A regional daily has marked the launch of a new edition by donating thousands of pounds to charity.

HTFP reported last week how Newsquest had announced it was launching a Teesside edition of the Northern Echo, a long with a new weekly title called the Salford City News, creating a number of journalism jobs in the process.

Both newspapers hit the streets for the first time today, and the Echo celebrated the occasion with a £3,000 donation to Butterwick Hospice, in Stockton-on-Tees, presented on behalf of the Gannett Foundation, the charitable arm of Newsquest’s owner.

The Teesside edition has its own dedicated editor in Nick Loughlin, with Hannah Chapman retaining overall control of the Echo. 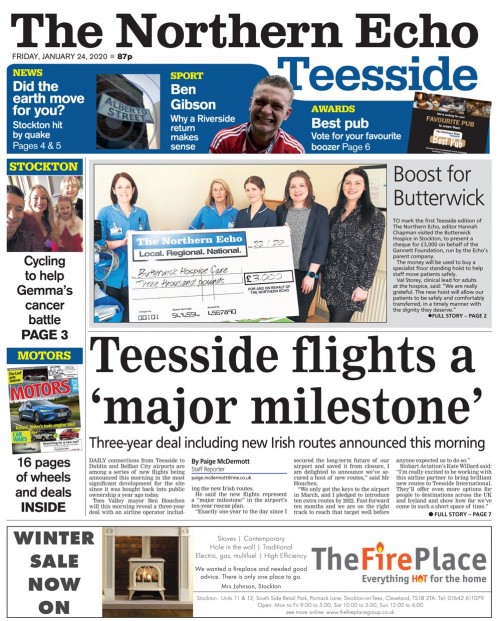 Hannah said: “We are really excited to launch the new edition. Butterwick, its supporters and committed volunteers are a shining example of what can be achieved when the people of Teesside work together. This is such an exciting time for Teesside, with a series of major projects in the pipeline which could bring massive economic boosts to the area.

“I regularly get asked by readers for more Teesside content, so taking the two things together, it seemed like a natural step to increase our coverage with this new edition. We’re also boosting our online offering, so readers can find out all the latest news and information.

“There is so much potential in the area, with Middlesbrough as the unofficial capital of Teesside, but also in the towns of Stockton, Yarm, Redcar and Saltburn, that we’re really looking forward to getting to the heart of the issues that matter in those communities.”

The first ever splash on the News featured a vow to “stand up” for Salford, with members of its editorial team, including editor Karl Holbrook, among the headshots featured on the front page. 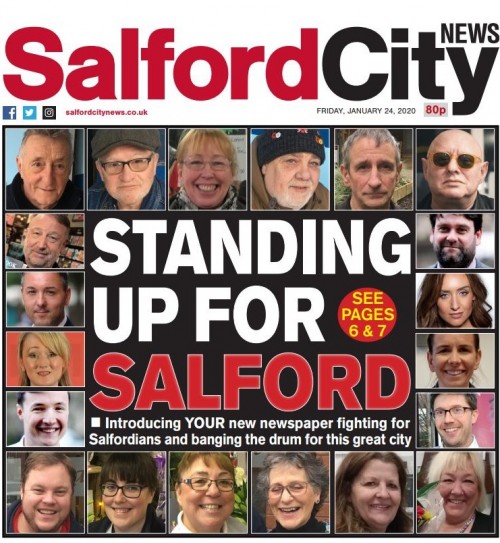 Karl said: “It’s been an absolute delight to launch this title. We’ve heard so much from people that they feel let down and ignored, so we thought it was right that we got in there to stand up for this great city.

“Salford is a really vibrant place and it is undergoing rapid change. We want to be there to both mark that change but also stand up for the heritage, culture and people that already thrive in Salford.”

The first edition includes features about the city’s best restaurants, a first look behind-the-scenes of the RHS Garden Bridgewater site, a catch up with a music hub that’s ploughing £750,000 into the community and an interview with the star of The Lowry’s big new show.

A bouquet of flowers will be handed out each week by the paper to an unsung hero it will also cast a weekly light on a local company in its ‘Firm Favourites’ feature.

Karl added: “But we won’t shy away from the hard, breaking news either. This week we’ve got all the breaking news you’d expect from a quality newspaper, including three big court cases, a tragic inquest and, by popular demand, our before-the-bench feature casts an eye on those who’ve been dealt with in courts.

“And online – at www.salfordcitynews.co.uk – we will be all over breaking news 24/7, seven days a week. We think we’ve put together a really great proposition and the reaction so far has been great.”