A regional daily has launched a new podcast examining the history of its patch.

Sheffield daily The Star has announced the launch of ‘Making Sheffield’, which celebrates the history and heritage of the city.

The podcast, which can be found here, is hosted by Star journalist Nik Farah, who will meet the experts behind some of Sheffield’s biggest events, allowing listeners to learn more about the city’s history.

The first episode looks at the story of Kathleen Roberts, who in 2009 made a phone call to the newspaper that led to its successful ‘Women of Steel’ campaign for long-awaited recognition for the women of Sheffield during the Second World War. 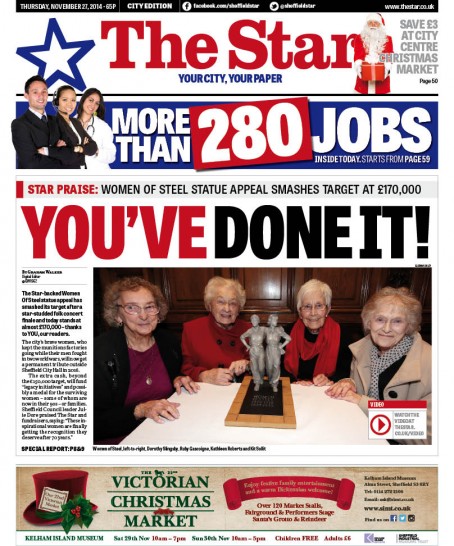 The Star’s Women of Steel campaign was successful

In a piece about the series, Nik wrote: “Series one of the new podcast will immortalise the moments that have shaped the steel city; celebrating key events and locations in its history, and paying tribute to some of the trials it has weathered and survived.

“We will meet the experts behind some of Sheffield’s biggest events, inviting you, our listeners, on a journey to discover more about the city where Mary Queen of Scots was imprisoned for 14 years; the city where Adolf Hitler trained his bombs for two terrible nights in 1940, leaving 10 per cent of the population homeless; and the home to incredible pioneers, from Harry Brearley to the Women of Steel.”