Football chant sung across patch thanks to daily

A regional daily’s readers sang a football chant in a show of solidarity after a call by the newspaper.

Portsmouth daily The News called on people to sing Portsmouth FC anthem the ‘Pompey Chimes’ at 3pm on Saturday, the traditional kick-off time for football matches in England.

The News devoted its front page to the call this Friday after from Portsmouth player Haji Mnoga, a native of the city, touted the idea on social media.

He is currently one of five players at the club, nicknamed Pompey, who are currently self-isolating after testing positive for coronavirus. 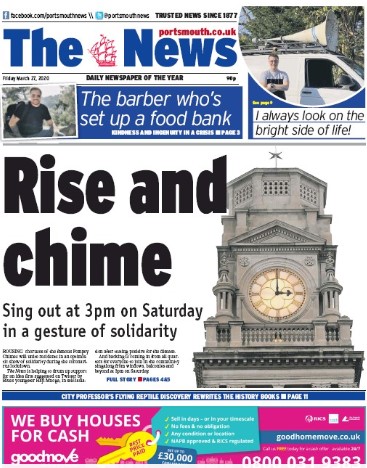 The idea was also backed by Portsmouth International Port, Portsmouth Guildhall and the Spinnaker Tower.

Mark Waldron, editor of The News, told HTFP on Friday: “The Pompey Chimes have been a symbol of unity for our city for decades and we need to hear them now more than ever.

“We’ve rightly clapped our NHS heroes and now we want to make some noise for the amazing people of Portsmouth to show that in these uncertain and unsettling times we stand strong together.”

Journalism trainers have shared tips on how they are providing their students with remote teaching during the outbreak.

Tutors on courses accredited by the National Council for the Training of Journalists have taken to using video conferencing platforms – including Zoom, Microsoft Teams and Big Blue Button – to help their students learn from home.

Paul Wiltshire, BA Journalism course leader at the University of Gloucestershire, has been using a mixture of Big Blue Button and Microsoft Teams.

He told the NCTJ the new style of teaching has meant some students have become more likely to contribute than before.

Said Paul: “Our experience has been that attendance and engagement has been encouragingly high, and that some students who can be reluctant to contribute are now coming forward.

“We’ve all also been doing a lot of video personal tutor and general catch-up meetings to discuss progress, the new online world, and the very real and heart-rending dilemmas some of our students are now facing.”

Further advice from NCTJ trainers can be found here.

BBC Local Radio has announced it is teaming up with manufacturers, retailers and a loneliness charity to offer free DAB radios to the most vulnerable people aged over 70.

The move is part of the BBC’s Make A Difference campaign, which was launched in the wake of the coronavirus outbreak, and is running across all 39 BBC radio stations in England.

BBC director-general Tony Hall said: “Local Radio is a lifeline at this time and has never been more important as a source of trusted local news and information, and also as a companion for people who are isolating.

“Make A Difference is already having a huge impact right across the country with 28,000 thousand calls in just five days. It is offering support and practical solutions to people who have nowhere else to turn.

“We want everyone who needs access to the radio to have it, that’s why we’re giving away DAB radios. I’m proud we’ve been able to coordinate this initiative with our partners who have been so generous in offering their resources.”

From Monday, anyone can nominate someone for a free radio by completing an online application form.

Newsquest titles have launched a bid to raise funds for frontline NHS staff and volunteers.

Cash raised from the campaign, entitled ‘Support Our Guardian Angels #ThankYouNHS’, will be used across 250 hospitals by providing wellness packages, food parcels and covering travel costs and accommodation.

Basingstoke Gazette editor Katie French, who is co-ordinating the campaign said: “It is a privilege to be able to raise money for the incredible staff of the NHS who are the backbone of our efforts to fight COVID-19.

“Local news publishers are much more than just delivers of news but hubs of the community and this has never felt more keenly than during a time of uncertainty. The feedback so far has been overwhelmingly positive.”

Education secretary Gavin Williamson has highlighted the importance of newspaper home delivery during the outbreak.

He said: “It is really important that people are able to access local news to gain an understanding of what is going on in their area.

“Local newspapers are absolutely vital when it comes to reporting on some of the key messages that we all need to take on board so we can tackle this virus.

“I hope some clarity and guidance can be issued to make sure it is understood that newspaper deliveries can – and should – still take place.

“In order to stop the spread of this virus, what we all want to see is less people leaving the house and having to go to the shops. Home deliveries are an important part of this battle to keep people self-isolating.”