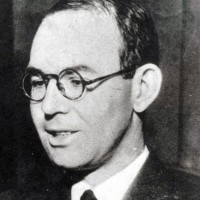 The family of a legendary daily journalist have hit out at a Hollywood film about his life which they claim has portrayed him inaccurately.

Gareth Jones, pictured, worked for the Western Mail in the 1930s and flew on a plane with Hitler, reported on the devastation of the Soviet famine and was ransomed by bandits in China before his death aged 30.

He died in Mongolia in 1935 in mysterious circumstances from three bullet wounds, and is now the subject of an upcoming movie starring James Norton, but his relatives have accused the film-makers of “sensationalising” his life.

His great-nephew Philip Colley has told the Sunday Times that the writer of the film has “invented multiple fictions”, including wrongly suggesting he was an accidental cannibal.

The family claim other inaccuracies also include that he met George Orwell, that he tried to interview with Joseph Stalin and that he had a love interest while travelling.

Mr Colley said: “In the film, they have got him up a tree eating bark, eating human flesh, tripping over dead bodies.

“He didn’t witness any dead bodies or any cannibalism, let alone take part in any.

“They’ve made Gareth a victim of the famine, rather than a witness.”

However, Mr Colley, who attended the fim’s premiere, said he was pleased it had “helped to raise the profile of a man I’m immensely proud to be associated with”.

A spokesman for the producers said: “This project is inspired by true events, and like all narrative films, it adds fictional elements to underscore themes and create a cohesive feature.”