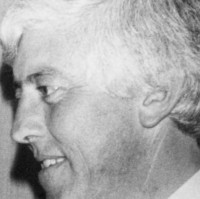 A regional daily journalist who covered politics for more than 30 years has died aged 80.

Tributes have been paid to Michael Devine, the former Dublin correspondent for the Belfast Telegraph.

Michael, pictured, reported daily on affairs in the Irish parliament for the Bel Tel, as well as other stories from the Republic of Ireland.

He said: “During the decades of political unrest he had an exceptional ability for reading the changes in the political landscape and how shifts in political opinion in Dublin would impact on Northern Ireland.

“He spent countless hours reporting Dail debates, and this was underpinned with private briefings he received from TDs (members of the Irish parliament) and ministers who trusted his honesty and integrity in committing to print, in a fair and balanced way, the Dublin take on the ever-changing political scene on both sides of the border.

“He was a truly first-rate, all-round journalist, and when he didn’t have a notebook in his hands he enjoyed nothing better than a good natter over his favourite tipple, a pint of Guinness.

“Telegraph journalists have fond memories of his visits to Belfast, ending in laughter and story telling. He will be sorely missed.”

He said: “He was a Dubliner to the core, but he was able to explain in a very even-handed way to a northern readership the complexities of political life on the other side of the border.

“At times that was not easy, especially during the worst of the Troubles.

“But nobody ever doubted or challenged the quality of his work. Michael was an outstanding journalist.”

Michael, who died on 24 May, lived with his wife Deirdre in Clontarf, Dublin.

He is also survived by his son Shane and two daughters, Michelle and Joanne.