A regional daily filled its front page with angry reader comments after surveying thousands of football fans on a failed takeover deal.

Newcastle daily The Chronicle splashed yesterday on remarks made by some of the 7,000 Newcastle United supporters who responded to the newspaper’s survey after a consortium led by Saudi Arabia’s Public Investment Fund pulled out of a bid to but the club.

The move prompted The Chronicle to write an open letter to the Premier League 11 days ago demanding an explanation for why the deal fell through.

The results of the paper’s survey, on which it splashed yesterday, revealed 94pc of United fans blamed the Premier League for the bid’s collapse. 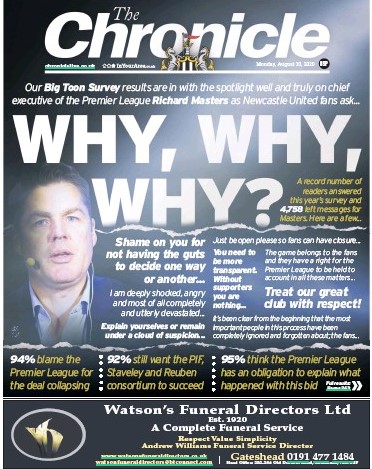 The survey’s results were accompanied by comments from respondents, including demands for the club to be treated with “respect” and calls for greater transparency.

In an accompanying editorial, Chronicle Newcastle United editor Mark Douglas wrote: “We have never seen such uniformity among fans who respond to the survey.

“With respondents coming from the across the globe – from Nigeria to Newcastle and the US to Scandanavia – there was a clear message to the Premier League with 95% agreeing that the Premier League has an obligation to explain what happened with this bid.”

He added: “The emotion in the messages was clear. Most were disappointed at the lack of transparency but there were also exhortations not to block a deal that could be transformative for Newcastle.

“At least a third mentioned fans needing more information about the process and what went on behind-closed-doors for four months.

“A week on from the consortium walking away and there is no sign of the anger subsiding on Tyneside. Rarely have Newcastle fans been so united.”