A regional daily has called for tougher sentences for those who assault emergency workers after an armed thug who attacked paramedics and a police officer walked free from court.

Newcastle daily The Chronicle has launched a new campaign called Justice for Heroes after the sentencing of Luke Gallagher caused “widespread outrage” among its readers.

Gallagher was given a suspended sentence last week after Newcastle Crown Court heard how he had swung a dog chain at a paramedic and punched him before causing £1,000 of damage to an ambulance by throwing bricks at it, injuring the man’s colleague in the process, before assaulting a police officer who turned up to deal with the situation.

Recorder Chris Smith handed down and eight-month, suspended for 18 months, to the 28-year-old, who has 20 previous convictions, on the grounds that he is a carer for his brother, is remorseful and because of the pandemic. 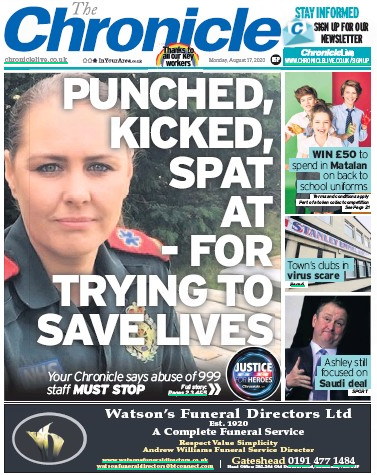 The Chronicle’s campaign, on which it splashed yesterday, has now called for a government review over the lack of prison sentences handed out to those who attack emergency workers.

Helen Dalby, audience & content director for Reach in the North East and Yorkshire, said: “Our frontline heroes risk their lives for us every day.

“It has been fantastic to see their bravery and dedication recognised by the community through powerful initiatives like the Clap for Carers and other local and national events.

“However, our emergency services need more than demonstrations of support, as moving and appreciated as these clearly are. They need to be protected in their vital frontline roles.

“Chronicle Live is therefore sending a clear message not only that attacks on emergency workers are unacceptable – but crucially, that there must be consequences when they do occur. For this to happen, the tougher sentencing powers already in place must be used to their full effect.”