A regional daily covered a bizarre sporting double after two football clubs on its patch were voted champions of their respective leagues due to the coronavirus pandemic.

The Dundee Courier devoted five pages of coverage to the promotion of both Dundee United and Raith Rovers yesterday, as well as featuring it on its front page, pictured below.

Their confirmation as champions of the Scottish Championship and League One respectively came after a vote by members of the Scottish Professional Football League to end the 2019-20 season before all matches had been completed.

The decision was made after United’s city rivals Dundee FC performed a U-turn on their previous intention to reject the SPFL’s proposal. 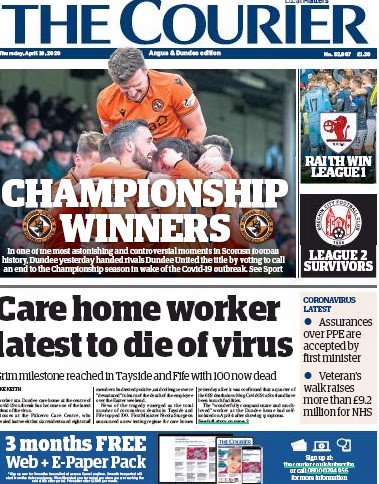 Courier sports editor Marc Deanie said: “The SPFL proposal and subsequent title triumphs for two of our clubs, Dundee United and Raith Rovers in the Championship and League One respectively, have provided a remarkable twist to what had been a fairly regular football season.

“This time last week, ahead of the vote, nobody could have predicted Dundee managing director John Nelms would play such a crucial role in the story, with his ‘yes’ vote – after days of deliberation – handing his club’s city rivals a return to the Premiership and also pushing Raith Rovers in Fife up the ladder.

“Dundee United fans are quite rightly celebrating their title win while the Dundee support await further comment from the Dens Park (the club’s home ground) hierarchy, who have led the push for league reconstruction.

“We hope our Courier front and back pages, four inside pages and online coverage of yesterday’s events capture a complex, fast-moving tale that’s showing no signs of slowing.

“Our front page today called it ‘one of the most astonishing and controversial moments in Scottish football history’ and I’m certain most observers of the game in our part of the world would agree.”

However, it is not the first time since the coronavirus outbreak that a regional daily in Dundee has found a way to fill its sports pages despite there being a lack of on-field action.

HTFP reported last month how the Courier’s DC Thomson sister title the Dundee Evening Telegraph had run a double-page spread on a local dominoes match, played before lockdown restrictions were enforced, to compensate for a lack of live football in the area.