A regional daily has launched a special appeal urging readers to fly the Union Flag from their homes to commemorate VE Day.

Portsmouth daily The News is calling on the people of its patch to decorate their houses in red, white and blue ahead of the 75th anniversary of the surrender of Nazi Germany next Friday.

The News is also encouraging readers to hold parties in their homes and decorating their properties with homemade bunting.

The appeal was launched on the newspaper’s front page yesterday. 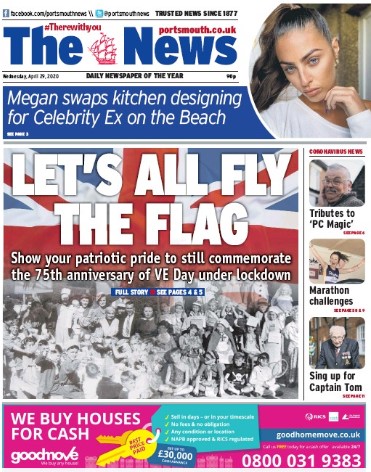 Editor Mark Waldron said: “Portsmouth is famous for its indomitable spirit and I know we will once again rise to the challenge.

“Living through this crisis will be the biggest challenge many of us will ever face.

“But it is nothing compared to the courage, determination and resolve needed by those who lived through the war, when Portsmouth was bombed so ruthlessly.

“We didn’t break then and I know we won’t break now – let’s unite and show the world why the British spirit truly is unbeatable.”