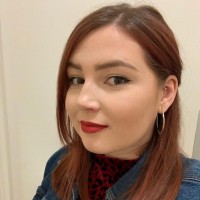 A regional daily’s business editor who beat cancer aged 27 says her fight against the disease has “done more good for me than bad”.

Charlotte Turner, who works for the Western Morning News and its Devon Live sister website, was forced to “stare my mortality in the face” and even planned her own funeral after being diagnosed with melanoma last year.

Charlotte, pictured, underwent surgery after a mole appeared on her neck, and now no longer requires treatment for the illness.

However, she will continue to have appointments with a specialist cancer nurse for the next five years.

In a piece about her experience for Devon Live, Charlotte wrote: “Nobody wants the C word to come out of a nurse’s mouth. Less so when you’re in your twenties.

“I planned my funeral on the day I found out – cremated not buried, in a wicker casket, all black please and a tragically ironic song about death to see me out. I wasn’t scared of dying, I was remorseful of all of the time I’d wasted.

“But it didn’t come to that. Instead, with swift care and very skilled surgeons, I lost a mole, some skin and lymph nodes, gained a couple of scars and ultimately, a new lease of life.

“It would have been easy to cling to the horrific side of it, and I did for a while – the pain and the worry was all-consuming at times. On the other hand, having faced the prospect of an untimely death, all I could think about was everything I had yet to achieve.”

In the weeks leading up to her second surgery due to the illness, Charlotte said she “reflected on all that time wasted on social media, getting caught up in arguments with strangers, on how many times I’d changed an outfit I had liked for fear of what people would think”.

She added: “It was like a mist had lifted and life was full. I now do the things that make me happy without hesitation, and see the good in small things. Ironically, cancer has done more good for me than bad.

“I don’t need any more treatment. The melanoma hadn’t spread, so I only need to go back and see my nurse every three months for the next five years.

“One thing that is now a constant in my life is sun cream, everyday. I have even managed to find a factor 100+. It’s not the heat that gets you, it’s sun rays. Even if it’s sunny and cold, sunny in December, sunny and raining – it’s still going to do you damage. Just wear it, please.

Cancer Research reports that there were 15,970 new cases of melanoma between 2014-16. And what’s even more concerning is that 86 per cent of cases are preventable. Cancer got me to stare my mortality in the face.

“It made me more determined to carve out a meaningful future. It’s extremely easy to let days fade into weeks and months pass without a thought. t’s sad that it took a horrible disease to make me realise this, but I’m really, really glad it did.”

Charlotte’s piece was published on Devon Live to coincide with World Cancer Day earlier his month.

She told HTFP: “The response to the piece has been overwhelming, actually. There has been a real outpouring of well wishes and I’ve had so many messages from people who have said the piece has made them take stock of what’s important in life.

“I felt extremely jittery on the day it went out for World Cancer Day – I had hoped the piece would help anyone else in my situation or going through cancer, as well as raise awareness of melanoma and how to spot the signs and symptoms.

“It was also important for me to spread that message of hope and defiance in the face of something awful – one that showed life could go on and get better.”