Daily newspapers on both sides of the Irish Sea have used their front pages to bid farewell to a sporting legend.

The funeral of former England footballer and Republic of Ireland manager Jack Charlton was held yesterday in Newcastle after a procession through his hometown of Ashington, Northumberland.

Newcastle daily the Chronicle splashed on Mr Charlton’s funeral today, as did the Yorkshire Evening Post, owing to his long association with Leeds United – the club where he spent his entire playing career.

Both titles had previously run front page tributes following the announcement of his death. 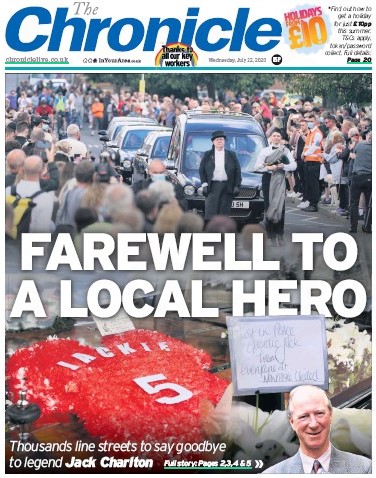 A YEP editorial states: “From Leeds United, Newcastle United, England and the Republic of Ireland, he was – to the very end – a larger than life character, and ‘man of the people’, who never lost touch with his working class roots.

“Synonymous also with Sheffield Wednesday and Middlesbrough, it was Charlton’s character – both on and off the pitch – that saw him become a World Cup hero who transcended generations from his peers who grew up in the shadow of war to youngsters sporting ‘Wor Jack’ posters as the funeral cortege slowly passed them in his home town of Ashington.

“And that his service coincided with tributes in Ireland, Charlton’s second home after guiding the country to the 1990 and 1994 World Cup finals, was a measure of the man as well as his enthusiasm for football – and life.” 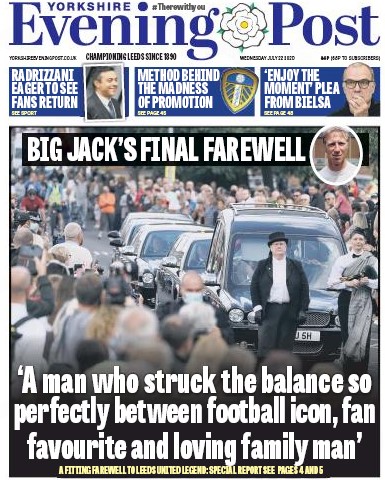 Mr Charlton was fondly remembered over the Irish Sea for his exploits as Republic of Ireland national team manager and the Belfast-based Irish News also hailed the “proud honorary Irishman” on its front page this morning. 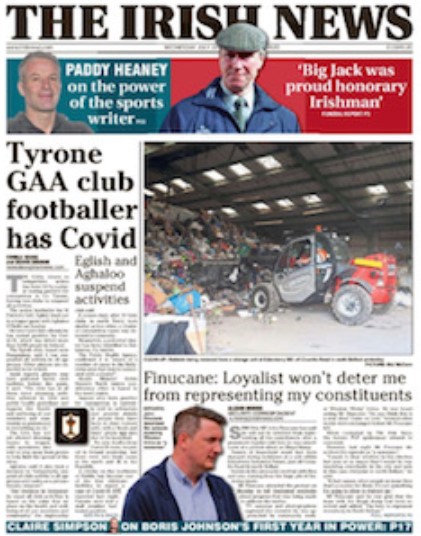