Mr Hume died on Monday and both the Irish News and the Belfast Telegraph splashed on his death yesterday.

Mr Hume, who led the Social Democratic and Labour Party from 1979 to 2001, was was co-recipient of the 1998 Nobel Peace Prize with David Trimble for his vital role in the Northern Ireland peace process.

The Belfast-based News hailed him as the “peacemaker” on its front page yesterday. 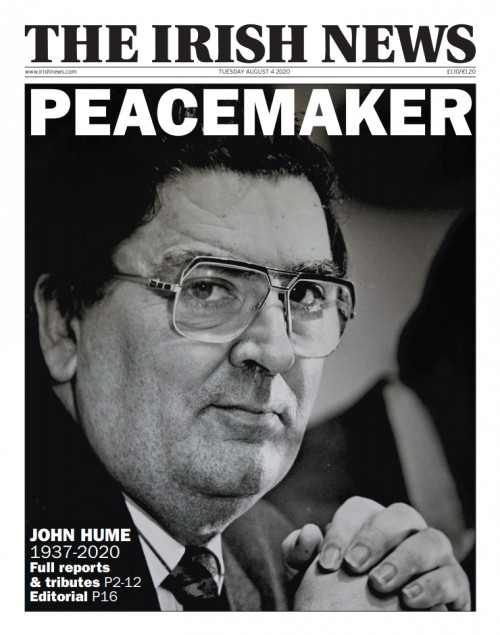 Editor Noel Doran told HTFP: “John Hume was a massive figure who had a close association with our paper since he entered public life back in the 1960s, so it was essential that we reflected his achievements in an appropriate way.

“We went for a simple and stark poster front page, with a black and white image and the single word headline Peacemaker.

“A further 11 pages of news, comment and pictures followed, as well as an op ed page dominated by a poignant cartoon and a keynote editorial, which we hope represented a fitting tribute to the Nobel laureate.”

Writing for the Bel Tel, Mr Hume’s biographer Barry White described him as “both Ireland and Britain’s loss”.

He added: “He was a giant of his time, at home in any company and well worthy of his Nobel peace prize, but an enigmatic figure, who always kept his cards close to his chest.

“Not that he was unfriendly, or wary of speaking his mind on any topic, political or otherwise, but he thought more deeply than anyone, around the clock, about what ailed his beloved country and what he could do to heal it.

“In time, historians compared him to Daniel O’Connell, Ireland’s foremost non-violent reformer in the 19th century, and in recent years an RTE poll voted Hume as the greatest Irishman in history.” 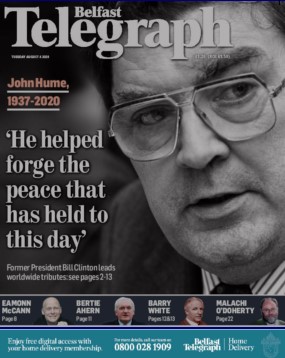