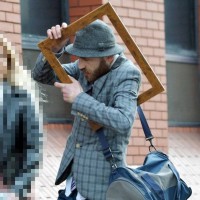 A journalist was urged to search online for a judge’s first name by court staff who refused to tell him it themselves.

Leicester Mercury and Leicestershire Live politics correspondent Dan Martin was told to use Google after a member of staff at Leicester County Court declined to give him the information when he requested it.

He was in court on Tuesday to cover an injunction hearing against “aggressive beggar” Robert Batty, pictured, who arrived at the venue carrying a picture frame.

Dan was told by one member of court staff the case was being heard by “Judge Headley” when he approached them after the hearing, at which the injunction was imposed banning Batty from parts of Leicester city centre, but was knocked back when he asked for the judge’s first name.

The exchange prompted him to share his frustration on Twitter, and post a screenshot of the recently updated guidance which offers advice to HM Courts and Tribunals Service staff on dealing with journalists.

The guidance states the media are “entitled to the full name of judges and magistrates (and their legal adviser) in all jurisdictions”.

Thankfully a second member of staff told Dan the judge was called “Richard”.

Dan told HTFP: “I wouldn’t say it was an argument, it was all pretty-even tempered, but it was one of those niggly little exchanges colleagues have with court staff all too often when trying to get basic information about cases.

“I actually thought he was joking when he said I should use Google. He’d already given me half the answer I wanted. I don’t know if it was stubbornness or just that he didn’t know reporters are entitled to the judge’s full name.

“When I asked why a couldn’t have the judge’s first name his response was basically ‘I’m not going to tell you and that’s the end of it.’”

“I appreciate they’re busy and they probably don’t see dealing with the press as a priority but the quickest way to get a reporter out of the door and avoid time-consuming and frustrating discussions like the one we had is to know the guidelines.”

Dan had previously had difficulties getting information about the injunction from the county court.

He had to get a Ministry of Justice press officer to contact court managers to get them to disclose details of the case, particularly the name of the respondent.

Mercury editor George Oliver said: “Updated HMCTS media guidance is coming into force next month as to how its staff should best work alongside the media.

“For years the News Media Association has lobbied about application of policies relating to open access to courts and judicial information – here’s another example of needless obstruction for its file.”