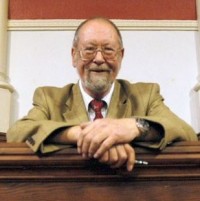 A court reporter who was one of a regional daily’s “true characters” has died aged 77.

Tributes have been paid to Malcolm Pickering, formerly of the Teesside Gazette.

Malcolm, pictured, served as the Gazette’s chief court reporter for many years up until his retirement at the age of 62 in 2004.

His career at the Middlesbrough-based daily had begun in the 1960s, initially working as a motoring correspondent.

Ian McNeal, editor of the Gazette’s Teesside Live sister website, said: “Malcolm was one of The Gazette’s true characters and had a great ability to bring the action from Teesside’s courts to life for readers.

“He was hugely respected not only by his colleagues but also by the judges and barristers from whose courts he would sit and report.

“Malcolm is still fondly remembered by those of us who worked with him as a great story-teller with a superb sense of humour who excelled in his work.”

Malcolm is survived by partner Margaret, children Dan and Caroline and two grandchildren.

“He worked for the Gazette twice, I believe, starting out as a motoring correspondent before later becoming the court reporter.

“He always had a love of motorcycles but a double hip replacement stopped him from riding his in later life.

“He enjoyed a simple life in his retirement, spending time with Margaret. He also enjoyed hunting and shooting.”

His funeral will be held at Hartlepool Crematorium on Tuesday at 10am.