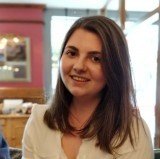 A councillor threatened a regional daily editor with violence and abused a local democracy reporter over a story she was planning to cover.

The unnamed councillor launched a tirade at Jessica Frank-Keyes, who works for the Eastern Daily Press under the BBC-funded scheme, describing her as a “crass waste of licence fee payers’ money” and a “freelancer”.

Jessica, pictured, revealed she had been subjected to the abuse in a series of Twitter posts, in which she disclosed that the council member had also threatened EDP editor David Powles with “violence”.

David has told HTFP he will be taking up the matter with the councillor and the local authority in question.  The paper has decline to publicly name and shame the individual concerned.

Posting on Twitter, Jessica wrote: “To the councillor who called me a ‘freelancer’ and a ‘crass waste of licence fee payers’ money’, I think people living in Norfolk see the value of stories about planning applications, local businesses, rural deprivation, Ofsted results, the spending of public money and climate change. Even if you don’t.

“Also you clearly don’t know many journalists if you think threatening my editor with violence is the way to get me not to report a story.

“Should add, the vast majority of councillors have been nothing but polite, professional and welcoming, even when I’m writing stories they may find critical.

“Also, nothing wrong with being a freelancer – although they clearly didn’t think so.”

Jessica’s decision to speak out prompted her comments to be widely shared on the social media site, with many fellow users sending her messages of support.

She told HTFP: “I didn’t expect the tweets to take off quite so much – as a journalist you get used to dealing with criticism – but it’s been great to see how much support there is for the local democracy reporter scheme and the valuable role it plays.”

David added: “Any form of abuse towards my team will not be tolerated, especially when they are simply trying to do their job.

“I shall be taking this matter up internally with the individual and organisation involved.”