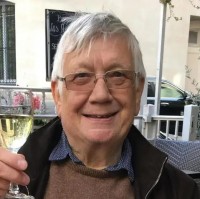 A former regional journalist who has died aged 67 after contracting coronavirus was “gone in a matter of hours”, his widow has said.

Tributes have been paid to Brian Hood, who caught COVID-19 after being admitted to hospital for treatment following a long-running fight with cancer.

Brian began his career on the Clitheroe Advertiser and also worked on Blackpool daily The Gazette before moving to Hong Kong’s South China Morning Post.

He later spent time on the Wall Street Journal and freelanced for most of the Fleet Street papers.

Between 1993 and his retirement in 2018 he worked on London’s Evening Standard, where he served as a sub-editor and later production editor on its business pages.

His widow Alison told the Evening Standard he “was gone in a matter of hours” after contracting the virus.

She said: “How can you feel two such intense emotions at the same time: all-consuming sadness at losing him and intense happiness that I was lucky enough to have had this man in my life.

“Brian was loved and respected by everyone who met him. I can’t think of a single person who would disagree with that statement.

“Amazing husband, wonderful father and loyal friend… I love you, honey, and long may you ‘look out to sea.’”

Evening Standard City editor Jim Armitage said: “He would be embarrassed at having his name in lights but quietly rather proud, I hope. A wonderful, clever man who put up with a lot of mayhem from a chaotic City editor with calm, good grace.”

Brian died in Ashford, Kent, on Wednesday and a celebration of his life is planned.

He is also survived by sons Tom and George.