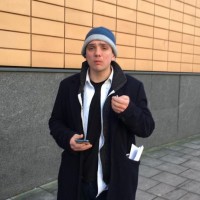 A charity worker who punched a coach driver tried to get reporting restrictions imposed on his case after a regional daily journalist photographed him outside court.

Tom Carter, pictured, was snapped by Bristol Post chief reporter Conor Gogarty while making his way to Bristol Magistrates’ Court, where he pleaded guilty to drunkenly attacking the driver and also stamping on a police sergeant’s foot.

But, while in court, Carter tried to get magistrates to restrict the Post’s coverage of his hearing on the grounds it would cause him “a lot of problems” if it was published.

Presiding Justice Dr Kate Rowe rejected his application after Conor pointed out he had done nothing wrong in taking Carter’s picture.

After being setenced to pay £475 and do 120 unpaid work hours, 32-year-old Carter said: “May I address the court? A Bristol Post journalist took my picture outside the court earlier.

“Bristol is a very small place and if this story goes on the website, it’s going to cause a lot of problems for me.  Is there anything you can do about it, legally?”

Dr Rowe replied: “That is nothing to do with us.”

Conor told HTFP: “I took a picture of Mr Carter when the court was adjourned for lunch. We were outside the court precincts at the time.

“After proceedings resumed, Mr Carter stood in the dock and asked the magistrates if reporting could be restricted.

“I argued there was no reason to impose a restriction. I pointed out I hadn’t done anything wrong in taking Mr Carter’s picture and had just been doing my job.

“Thankfully, the chairwoman of the magistrates agreed.”

Sian Hunt, prosecuting, told the court that police were called to bristol bus and coach station on 3 January after Carter had punched the driver in the face twice after being refused entry to a coach.

She said that when police detained Carter nearby, he became agitated, resisted the handcuffs and stamped on the police sergeant’s foot.

Andrew Ray, defending, said Carter’s “emotions were riled up” at the time of the attack, having become depressed following the death of his friend’s grandmother.