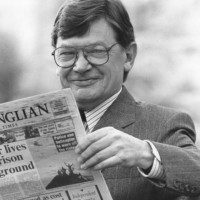 A district chief reporter who served a regional daily for 42 years has died aged 88.

Tributes have been paid to Robin Williams, who worked in Bury St Edmunds for the East Anglian Daily Times over the course of four decades.

Robin, pictured, was in charge of all aspects of the EADT’s Bury office, which at times had more than 12 people on the staff.

He died in Addenbrooke’s Hospital, Cambridge, after a sudden illness.

Terry Hunt, a former editor of the Ipswich-based daily, was among those to begin their career under Robin’s guidance.

He told the EADT: “Robin was the absolute epitome of a good district chief reporter. He loved the town and knew it like the back of his hand.

“Absolutely nothing of note happened in Bury without Robin knowing about it. His experience, calmness and patience helped me so much.

“He taught me the importance of responsible, balanced journalism and how vital it was to ensure that every word I wrote was true, accurate, and fair to the person or organisation I was writing about.

“Over the decades, so many young reporters have so much to thank Robin for. Like many others, I arrived at Bury completely raw, and Robin was an invaluable influence.

“Robin instilled in me the values which I hope stayed with me during my long career with the EADT and Ipswich Star.”

Robin lived in Bury for his whole life and trained under his father Frank, who was also a journalist, after joining the EADT in 1948.

His work led to him meeting Cynthia Snazell, his wife of 66 years, who worked at Bury’s telephone exchange and would chat to him while he was filing Bury Town Football Club match reports through to Ipswich.

Cynthia later joined the EADT in Bury and worked for 24 years in the front office.

Robin retired in 1990, but continued to carry a notebook and pencil everywhere with him so he could jot down things of interest.

Said Cynthia: “Robin loved his job. We gave up having set meal times because he was so often late or suddenly called out on a job. Being a reporter was Robin’s life.

“Our first home was a flat in Hatter Street, opposite the office, and we used to keep our window open in the evening so we could hear if the telephone rang – we didn’t have our own – and Robin would be off across the road and out on a job at the drop of a hat.”

Robin is survived by Cynthia, their daughter Jane Watson and grandsons Thomas and George Watson, as well as his sister Iris and brother Christopher.

His funeral is on Friday 6 March at 3pm, in St Edmund’s Chapel at West Suffolk Crematorium, Risby.