Government plans to look into a public inquiry over a terrorist attack “would not have happened” without a campaigning journalist, his editor has said.

Birmingham Mail editor Graeme Brown has hailed the work of Andy Richards, the newspaper’s assistant head of print, after Home Secretary Priti Patel agreed to look into the case for a public inquiry into the 1974 Birmingham Pub Bombings – and to meet with the families of the victims.

The Mail successfully campaigned for an inquest to be reopened into the deaths of 21 victims of the atrocity, which last year returned a verdict of unlawful killing.

The resumption of the hearings came after Andy discovered in 2014 that the hearings had never been completed. 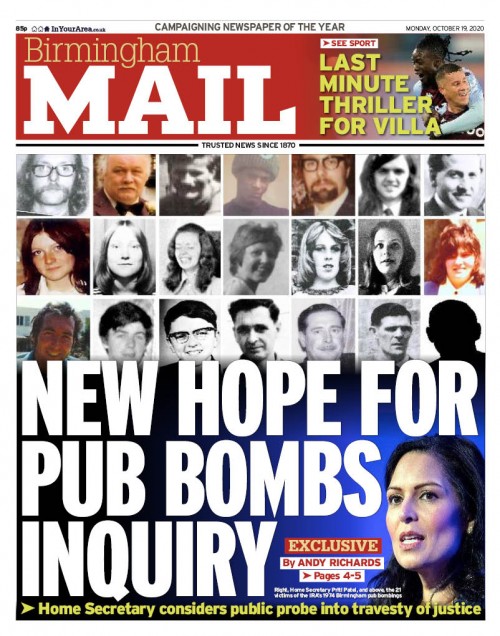 He subsequently worked with the families of the victims to prepare for a succession of legal challenges to counter the reluctance of the authorities to resume the inquest.

The Mail splashed on the latest development in the case last Monday, pictured above.

Editor Graeme Brown told HTFP: “This is welcome progress, and it simply would not have happened without one journalist.

“Our Andy Richards has lived and breathed this campaign for years. He knows it inside and out and writes passionately about it but the real secret is he actually cares.

“He knows the family members well, likes them and is desperate to help.

“We are pleased the Home Secretary has agreed to look into this – it represents welcome, and long overdue, progress – but it means little unless she takes the next step.

Ms Patel said: “My sympathy remains with all those affected by these awful events 46 years ago.

“And I recognise the desire of the victims’ families and the wider community to see those responsible brought to justice.

“So I would welcome the opportunity to meet some of the families so that I can take their views into account, together with official advice, before making any decision.”