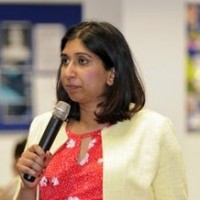 The Attorney General has issued a warning to a regional daily over reader comments posted on its website in relation to an ongoing court case.

Suella Braverman, pictured, sent a letter to South Cumbria daily The Mail after receiving reports of potentially prejudicial comments on its site.

The comments were removed before The Mail had received Ms Braverman’s letter.

They relate to the case of 19-year-old woman who has been charged with seven counts of perverting the course of justice.

The Barrow-in-Furness-based Mail’s coverage of the case prompted chief reporter Amy Fenton and her daughter flee their home and move into police protection following a death threat.

The newspaper has since received support from around the world over the abuse its journalists have faced because of the matter.

Mail owner Newsquest has confirmed the comments were removed in line with company policy as soon as staff were alerted to them.

The letter from the Attorney General arrived at a later date.

A spokesperson for the Attorney General’s office said: “I can confirm that this matter has been referred to our office.

“The law officers will review these allegations and decide whether to institute contempt proceedings against The Mail.

“We cannot comment on the nature of any referrals.”