Weekly newspaper staff went “above and beyond” to cover a potential disaster which saw 1,500 people evacuated from their homes.

The Glossop Chronicle has spent the past week keeping readers up to date with the situation in Whaley Bridge, Derbyshire, which saw people living there removed from their homes last Thursday after the dam at Toddbrook Reservoir was damaged during heavy rain.

Chronicle editor David Jones, who has covered the patch for more than 50 years, was on the scene on the first day covering the evacuation and people’s efforts to rally round offering help, with coverage continuing online throughout the weekend and beyond.

News broke that those affected were able to return to their homes just as the Chronicle was about to print on Wednesday, and the paper splashed with a salute to the “heroes” who had aided the effort. 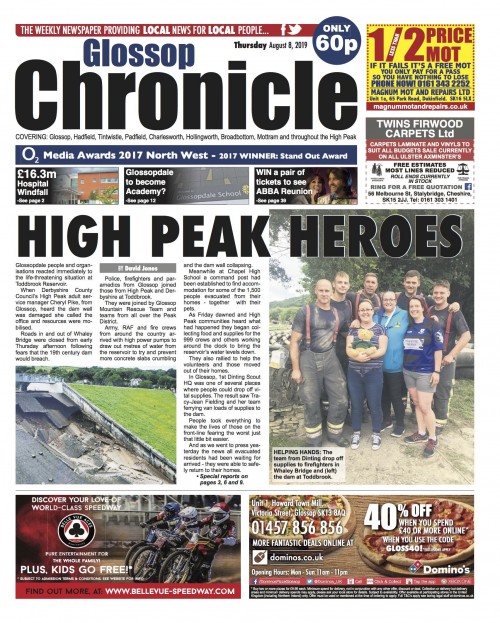 Nigel Skinner, editor of Chronicle owner Quest Media, told HTFP: “With a news team of four reporters (including David) covering all the news across Tameside, Oldham and Glossop, for our Reporter editions and the Chronicle, it’s certainly been a challenging week – covering all the events in Whaley Bridge coupled with a huge mill blaze in Ashton-under-Lyne which broke out on Tuesday afternoon and burned all night, itself leading to the evacuation of 50 residents living nearby.

“Everyone has had to go above and beyond – especially for our online and social news offerings – not to mention for the papers – and it’s thanks to everyone’s hard work and dedication that we have achieved the coverage we have.

“David has been reporting for more than 50 years now and is still an example to us all.”

The Buxton Advertiser, which also covers Whaley Bridge, splashed on the situation in the town yesterday too. 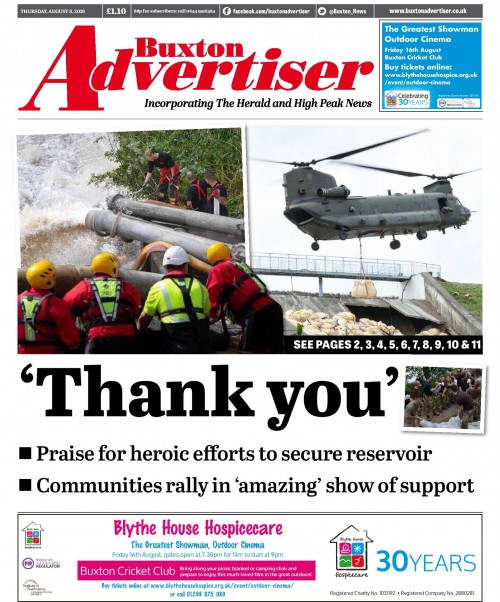 The Advertiser offered a “thank you” to all those who helped during the crisis.

Eleven pages were dedicated to the story in yesterday’s paper, mainly focusing on the efforts of the 1,000-strong team involved in the emergency operation, and the support shown by the community in Whaley Bridge and beyond.

The Advertiser’s photographer Jason Chadwick was the first on the scene last Thursday morning, providing initial pictures and video of the dam and the operation to secure it.

After publishing an initial article about the closure of the town’s memorial park due to safety fears over the dam, the Advertiser team followed this up with a live feed which was updated throughout the day and into the early hours of Friday morning.

Live coverage of the national evacuation operation continued online throughout Friday, the weekend and into the following week until Wednesday afternoon.

Digital editor Louise Cooper said: “The way the emergency teams, armed forces and volunteers responded to this unprecedented incident was nothing short of incredible. What was equally heartwarming to see was the response not just from the local community, but also from the wider public.

“The small editorial team at the Buxton Advertiser pulled out all the stops, working day and into the night to ensure local people were kept up to date on the latest situation, transport information, where to seek help and any other relevant details.

“It has been an incredible team effort, and I am very proud not only of the coverage provided by everyone at the Advertiser but also to be a part of such a wonderful community which pulls together in a time of crisis.”

Overall, the Advertiser’s online coverage spanned more than 60 stories including live feeds and photo galleries, along with Facebook Live videos and interviews.