A weekly newspaper turned its masthead gold as it celebrated 100 years in business.

The Brentwood Gazette celebtrated the occasion with a special edition last week, complete with an eight-page supplement on the paper’s history.

The supplement included features on the founding of the Gazette and a look at the news in the Brentwood area in 1919, as well as interviews with readers explaining what the paper means to them.

Speaking to HTFP, editor Alan Woods paid tribute to the staff who had put together the edition, pictured below. 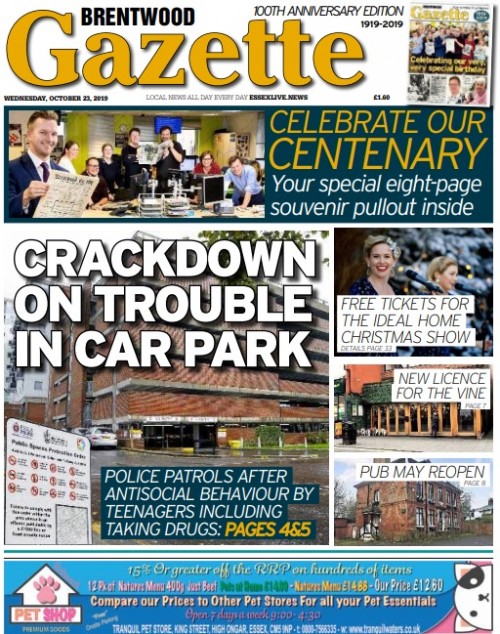 He said: “Regional community content manager Maxine Dalziel has worked so hard on this in the past few weeks and her work has really paid off. The supplement was fantastically designed by Sub Editor John Palfrey, who took extra care to ensure each page looked great.

“The supplement features a potted history of the Gazette, the full first-edition of the newspaper across the centre pages and an interview with Florence Gosling of Brentwood, who shares the same birth year as the newspaper.”

Alan added: “The Gazette was my first editorship and I don’t think any editor ever forgets the first newspaper they were fully responsible for. It will always have a special place in my heart and it has been a real honour to hold this position for just the last five years of the papers’ life.

“In my time Gazette journalists working for me have broken so many big exclusive stories and held the powers that be to account on a weekly basis.

“But I’d also like to mention the amazing work of all my predecessors, who shaped the paper to become what it is today. I know each one of them will have enjoyed the same thrill of editing the newspaper as I have.”

The Gazette’s newspaper sales team, led by Newspaper Sales Manager Nathan Grant, were in Brentwood High Street yesterday morning selling copies of the edition and talking to Gazette readers about their memories of the newspaper.

Alan added: “The reaction to the supplement has so far been excellent, with readers keen to get their hands on the special edition.

“The newspaper itself has a gold masthead as well so that really helps the edition stand out from the norm.” 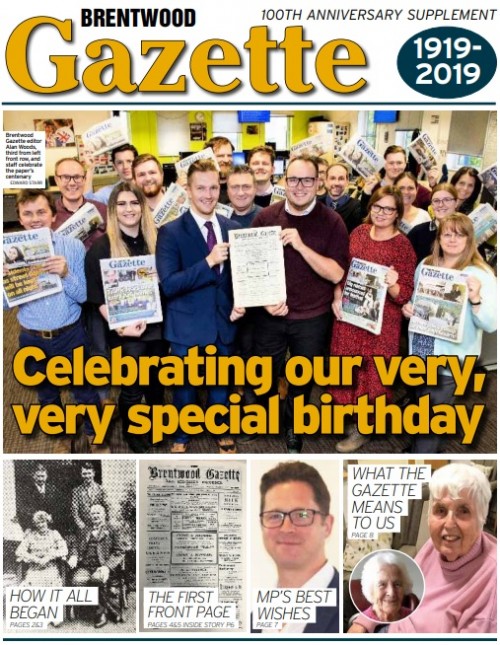