A newspaper which won two honours at last month’s Regional Press Awards after exposing a paedophile ring has shut with between 15 and 20 jobs thought to be affected.

Tindle Newspapers has closed the Yellow Advertiser, with last Thurday’s edition being the last to be published.

A message in what proved to be the final issue stated that the four-edition paper was in consultation with staff and that this “could result in the closure of the titles.”

HTFP understands between 15 and 20 staff, including three working in editorial, are affected by the closure which was confirmed to staff on Monday.

The decision comes after the Basildon-based weekly won the ‘Making a Difference’ prize at last month’s RPAs for its investigation into a child sex abuse ring in Essex.

Chief reporter Charles Thomson also triumphed in the Weekly Reporter of the Year category, partly for his coverage of the story. 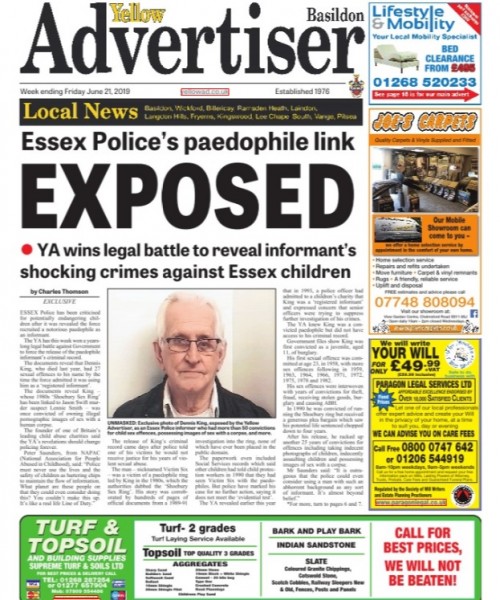 At the time of its closure, the free title ran four editions – covering Basildon, Rochford and Castle Point, Havering and Southend.

The Advertiser bowed out with an exclusive related to the three-year-long sex ring investigation after winning a lengthy legal battle against government to force the release of a paedophile police informant’s criminal record.

Its Basildon edition also carried news of two local campaign victories as a former Basildon Council leader credited the paper’s coverage with speeding up repairs to a swimming pool, while the current deputy council leader intervened to stop plans to turn part of a recreation ground into housing after reading about the proposal on the paper’s website.

The message in Thursday’s edition stated: “We sadly have to report that as we go to press we are currently in consultation with staff at the Yellow Advertiser, which could result in the closure of the titles published, so this could be the last edition of the Yellow Advertiser Series.

“If this is our last edition we would like to take this opportunity to thank our customers and readers for your loyalty over many years.”

Scott Wood, Tindle Newspapers South East managing director, said: “I can confirm that after a period of consultation with staff based at our Basildon offices regarding the proposed closure of the Yellow Advertiser Series, this business has unfortunately now ceased publication, its final issue being week commencing 17 June 2019.”