A weekly newspaper successfully tracked down nine footballers who secured a trophy triumph for its patch 30 years ago.

Sports editor Matt Panter had worked over the past months to trace as many of those involved in the victory for the club, known as the Lambs, as he could – even managing to get a phone interview with manager Graham Smith from his home in Cyprus.

Former Herald staff, ex-sports editor Sam Holliday and photographer Paul Barber, were also involved in the production of the 16-page supplement, which appeared in Thursday’s edition. 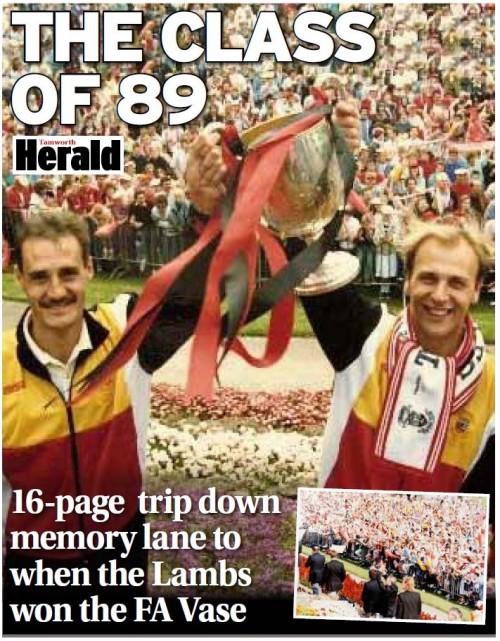 Executive editor Charlotte Hart told HTFP: “Tamworth FC’s incredible FA Vase journey during the 1988-89 campaign was something that captured the imagination of the whole town. You didn’t even have to be a football fan to get caught up in the wave of excitement as the Lambs reached the final at Wembley, where they faced Sudbury Town.

“As we reached the 30th anniversary, we decided to produce a supplement, something that combines football and nostalgia. It has been a labour of love for sports editor Matt Panter over the past couple of months as he has made contact with as many of the squad from 1989 as possible.

“Some players, such as Steve Cartwright and Dale Belford, live locally and were easy to track down. Goalkeeper Belford even visited the Herald offices to look through our library archives – which go all the way back to 1868 – and took a look through our bound reports from the day at Wembley.

“Manager Graham Smith was a little more difficult to get hold of as he now lives in Cyprus but Matt managed to grab a phone interview.

“In the end, Matt managed to speak to eight of the team from Wembley as well as Andy Foote, who retold his heartbreaking story of getting injured the day before the biggest day of his life. He never played football again.”

Two members of the team, Ian Moores and Russell Gordon, are now sadly no longer with us.

Added Charlotte: “The supplement was put together with the support of former Herald sports editor Sam Holliday – a huge Lambs fan – who provided a wonderful account of his time covering Tamworth at that time.

“Former Herald photographer Paul Barber also played a key role as his photographs from Wembley and Peterborough give the pull out its visual appeal. Some of the pictures used had never been published before which gives it another selling point.

“The 16 pages were designed by Matt and colleague Chris Philpotts and, as well as interviews with the squad from the time, it includes memories from supporters and, in order to bring it up to date it also includes current manager Gary Smith and chairman Bob Andrews. We hope our readers enjoy being transported back to what was a memorable sporting occasion for our town.”