A columnist who wrote for a weekly newspaper for more than a quarter of a century has died aged 82.

Tributes have been paid to Ian Dewhirst, who had written the Memory Lane column for the Keighley News since 1992, having retired the previous year after 24 years as a reference librarian.

The author of several books on local history, he received the MBE 20 years ago for his services to the field – and even had a diesel train named after him.

The News ran Memory Lane as normal last week and Ian’s final contribution will be carried, as a tribute, in the next edition. 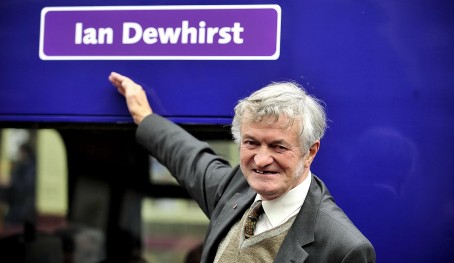 Ian Dewhirst with the train named in his honour

Editor Nigel Burton said: “It’s very sad for the people of the district to have lost such a great local historian and such a lovely man.

“He was a joy for the team at the Keighley News to work with over the years, and provided our readers with a wealth of fascinating local information and photographs about the region’s history.

“And we know the people who enjoyed his many talks and presentations about the area’s heritage will be saddened to hear of his death. The town will miss him greatly.”

Fellow Keighley historian Andy Wade told the News: “As a local historian he was legendary.

“He is responsible for the unique archive we have in Keighley Library and he managed to make history come alive for so many people.

“He always injected humour into his talks, which was a great way of putting people at ease and into a good frame of mind to listen and learn about his passion for the subject. He’ll be sadly missed.”