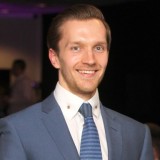 A weekly newspaper is preparing to celebrate its 100th anniversary with a special edition.

The Brentwood Gazette will mark the milestone with a supplement about its history, which is available now for readers to pre-order.

The supplement will feature an in-depth history of the Gazette, as well as a full copy of its first edition from Saturday 25 October 1919.

Gazette staff will celebrate the anniversary by giving out goodie bags in Brentwood High Street on Wednesday morning.

Gazette brands editor Alan Woods, pictured, said: “This is a big celebration in the life of our dear Gazette and it has been a pleasure to edit the newspaper for the past five years.

“The Gazette still remains as important in Brentwood and the surrounding areas as it did when it was launched all those years ago.

“I struggle to think of an industry that is changing as fast as local media today but in a way that strengthens the Gazette’s stance. It remains the go-to, trusted source of news for our area.

“I’d like to thank each and every one of you who has bought a copy of the Gazette and supported us over the last decade.”