A weekly newspaper turned its masthead all the colours of the rainbow to celebrate its patch’s annual LGBT Pride festival.

The Fife Free Press ran the colourful splash yesterday as it marked the third year of Fife Pride.

It is the third year in a row that the Free Press has run a souvenir front page to celebrate the festivities.

Journalists from the Kirkcaldy-based weekly will be covering the festival this weekend. 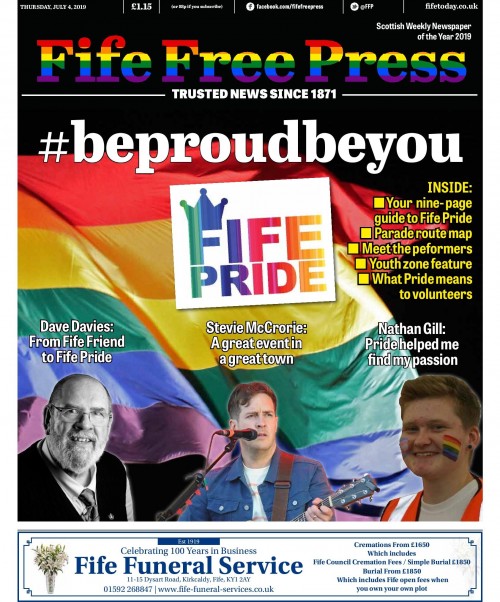 Editor Allan Crow told HTFP: “The way in which the town has embraced Pride has really struck a chord with the organisers – from town centre shops decorating their windows to businesses generating merchandising, and several thousand people attending on the day, either joining the parade or attending the entertainment in the Town Square.

“It may not be the biggest Pride event, in terms of scale, but it seems to be one with a very special atmosphere.

“This year we focused very heavily on the people at the heart of the event, and told their stories – what it means to them, why it is important – and also carried a long read from one supporter, Dave Davies, who looked back on growing up gay in Fife over the past few decades. For me that was the heart of the coverage which spanned some nine pages.

“The news team will all be at Fife Pride this weekend, speaking to people taking part, shooting video, and also joining in the fun.”